The Social Animal: The Hidden Sources of Love, Character, and Achievement (Paperback) 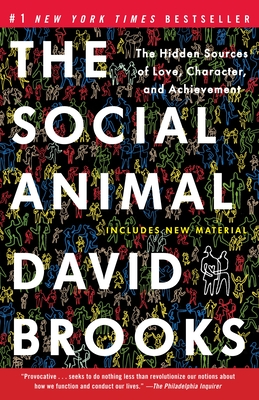 With unequaled insight and brio, New York Times columnist David Brooks has long explored and explained the way we live. Now Brooks turns to the building blocks of human flourishing in a multilayered, profoundly illuminating work grounded in everyday life. This is the story of how success happens, told through the lives of one composite American couple, Harold and Erica. Drawing on a wealth of current research from numerous disciplines, Brooks takes Harold and Erica from infancy to old age, illustrating a fundamental new understanding of human nature along the way: The unconscious mind, it turns out, is not a dark, vestigial place, but a creative one, where most of the brain’s work gets done. This is the realm where character is formed and where our most important life decisions are made—the natural habitat of The Social Animal. Brooks reveals the deeply social aspect of our minds and exposes the bias in modern culture that overemphasizes rationalism, individualism, and IQ. He demolishes conventional definitions of success and looks toward a culture based on trust and humility. The Social Animal is a moving intellectual adventure, a story of achievement and a defense of progress. It is an essential book for our time—one that will have broad social impact and will change the way we see ourselves and the world.

David Brooks writes an op-ed column for The New York Times. Previously, he has been a senior editor at The Weekly Standard, a contributing editor at Newsweek and The Atlantic Monthly, and an op-ed editor at The Wall Street Journal. He is currently a commentator on PBS NewsHour and contributes regularly to Meet the Press and NPR’s All Things Considered. He is the author of Bobos in Paradise: The New Upper Class and How They Got There and On Paradise Drive: How We Live Now (And Always Have) in the Future Tense. His articles have appeared in The New Yorker, The New York Times Magazine, Forbes, The Washington Post, The Times Literary Supplement, Commentary, The Public Interest, and many other magazines. David Brooks lives in Maryland.

“Provocative and fascinating . . . seeks to do nothing less than revolutionize our notions about how we function and conduct our lives.”—The Philadelphia Inquirer

“[A] fascinating study of the unconscious mind and its impact on our lives . . . Brooks has done well to draw such vivid attention to the wide implications of the accumulated research on the mind and the triggers of human behaviour.”—The Economist

“Multifaceted, compulsively readable . . . Brooks’s considerable achievement comes in his ability to elevate the unseen aspects of private experience into a vigorous and challenging conversation about what we all share.”—San Francisco Chronicle

“Brooks surveys a stunning amount of research and cleverly connects it to everyday experience. . . . As in [Bobos in Paradise] he shows genius in sketching archetypes and coining phrases.”—The Wall Street Journal

This feature require that you enable JavaScript in your browser.
END_OF_DOCUMENT_TOKEN_TO_BE_REPLACED

END_OF_DOCUMENT_TOKEN_TO_BE_REPLACED

This feature require that you enable JavaScript in your browser.
END_OF_DOCUMENT_TOKEN_TO_BE_REPLACED