You Ain't Heard Nothin' Yet: Interviews with Stars from Hollywood's Golden Era (Hardcover) 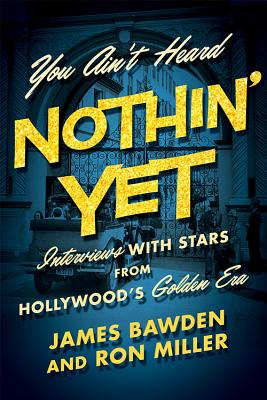 Journalists James Bawden and Ron Miller spent their careers interviewing the greatest stars of Hollywood's golden age. They visited Lee Marvin at home and politely admired his fishing trophies, chatted with Janet Leigh while a young Jamie Lee Curtis played, and even made Elizabeth Taylor laugh out loud.

In You Ain't Heard Nothin' Yet, Bawden and Miller return with a new collection of rare interviews with iconic film stars including Henry Fonda, Esther Williams, Buster Keaton, Maureen O'Sullivan, Walter Pidgeon, and many more. The book is filled with humorous anecdotes and incredible behind-the-scenes stories. For instance, Bette Davis reflects that she and Katharine Hepburn were both considered for the role of Scarlett O'Hara but neither was "gorgeous enough" for the part; Janet Leigh analyzes the famous shower scene in Psycho (1960), which was shot in seven days and gave the actress nightmares for years; and Jimmy Stewart describes Alfred Hitchcock as a "strange, roly-poly man, interested only in blondes and murder." Popular horror film stars from Lon Chaney Jr. to Boris Karloff and Vincent Price are also featured in a special "movie monsters" section.

With first-person accounts of Hollywood life from some of the most distinguished luminaries in the history of American cinema, this entertaining book will delight classic movie fans.