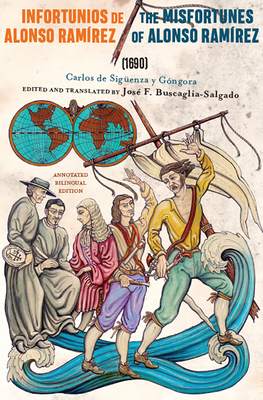 In 2009, 319 years after its publication, and following over a century of copious scholarly speculation about the work, José F. Buscaglia is the first scholar to furnish direct and irrefutable proof that the story contained in the Infortunios/Misfortunes is based on the life and times of a man certifiably named Alonso Ramírez, who was shipwrecked on Herradura Point in the Coast of Yucatán on Sunday September 18, 1689. This first bilingual edition of the Infortunios/Misfortunes reports the findings of almost two decades of sustained research in pursuit, on land and by sea, of a most elusive historical character who was, as we now can attest with all degree of certainty, the first American known to have circumnavigated the globe. Captured by pirates, shipwrecked, and eventually rescued and sent on his way, this is one man’s story of his unanticipated voyage around the Early Modern world. With transcription, translation, notes, maps, images, and critical essay by Jose F. Buscaglia-Salgado, this Rutgers edition is the most complete and authoritative study on a work that grants us privileged access to the intricacies of early American subjectivity.

José F. Buscaglia is a professor and chair of the Department of Cultures, Societies, and Global Studies at Northeastern University in Boston, Massachusetts. He is the author of Undoing Empire: Race, and Nation in the Mulatto Caribbean and two books in Spanish, one being the Spanish edition of the Infortunios.

"Buscaglia's Spanish-English edition of Siguenza y Gongora's greatest work is a magnificent illustration of what the fields of history and literature can offer when they are brought together. And it is fun to read, to boot! The text takes readers on a fascinating, whirlwind tour through the interlocking worlds of seventeenth-century Mexico and Southeast Asia."
— Camilla Townsend

“Buscaglia-Salgado’s bilingual edition of Infortunios de Alonso Ramirez/The Misfortunes of Alonso Ramirez is an essential contribution. Multi-faceted and meticulously researched, it situates the story in the context of a global history of empires and piracy, opening new channels for further analysis and research. Deftly deciphering documents in colonial archives, questioning editorial practices, sketching maps, and revisiting his own sailing voyages, Buscaglia-Salgado has tracked Ramírez’s routes, uncovering some of the mysteries surrounding the protagonist and making visible a global historical process.”
— Arcadio Díaz-Quiñones

This feature require that you enable JavaScript in your browser.
END_OF_DOCUMENT_TOKEN_TO_BE_REPLACED

END_OF_DOCUMENT_TOKEN_TO_BE_REPLACED

This feature require that you enable JavaScript in your browser.
END_OF_DOCUMENT_TOKEN_TO_BE_REPLACED