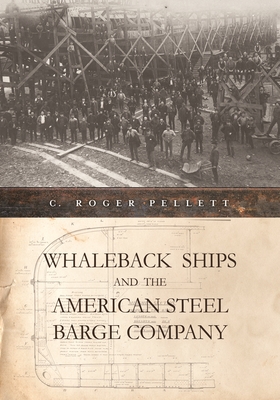 The whaleback ship reflected the experiences of its inventor, Captain Alexander McDougall, who decided in the 1880s that he could build an improved and easily towed barge cheaply by using the relatively unskilled labor force available in his adopted hometown of Duluth, Minnesota. Captain McDougall's dream resulted in the creation of the American Steel Barge Company. From 1888 to 1898, the American Steel Barge Company built and operated a fleet of forty-four barges and steamships on the Great Lakes and in international trade. These new ships were considered revolutionary by some and nautical curiosities by others. Built from what was then a high tech material (steel) and powered by state-of-the-art steam machinery, their creation in the remote north was a sign of industrial accomplishment.

In Whaleback Ships and the American Steel Barge Company, Roger C. Pellett explains that the construction of these ships and the industrial infrastructure required to build them was financed by a syndicate that included some of the major players active in the Golden Age of American capitalism. The American Steel Barge Company operated profitably from 1889 through 1892, each year adding new vessels to its growing fleet. By 1893, it had run out of cash. The cash crisis worsened with the onset of the Panic of 1893, which plunged the country into a depression that mostly halted the ship-building industry. Only one shareholder, John D. Rockefeller, was willing and able to invest in the company to keep it afloat, and by doing so he gained control. When prosperity returned in 1896, the interest in huge iron ore deposits on the Mesabe Range required larger, more efficient vessels. In an attempt to meet this need, the company built another vessel that incorporated many whaleback features but included a conventional Great Lakes steamship bow. Although this new steamship compared favorably with vessels of conventional design, it was the last vessel of whaleback design to be built.

Whaleback Ships and the American Steel Barge Company objectively examines the design of these ships using the original design drawings, notes the successes and failures of the company's business strategy, and highlights the men at the operating level that attempted to make this strategy work. Readers interested in the maritime history of the Great Lakes and the industries that developed around them will find this book fascinating.

C. Roger Pellett is a retired business executive with a bachelor's degree in engineering and a master's degree in business administration. Pellett has many years of experience managing the fabrication of heavy industrial components, as well as a formal education and training in naval architecture and marine engineering. He lives in Duluth, Minnesota, where the first whaleback ships were built, and since retiring has worked as a volunteer for the SS Meteor, the world's only survivor of the fleet of forty-four whaleback barges and steamships.

This feature require that you enable JavaScript in your browser.
END_OF_DOCUMENT_TOKEN_TO_BE_REPLACED

END_OF_DOCUMENT_TOKEN_TO_BE_REPLACED

This feature require that you enable JavaScript in your browser.
END_OF_DOCUMENT_TOKEN_TO_BE_REPLACED