Colonial Legacies in Chicana/o Literature and Culture: Looking Through the Kaleidoscope (Paperback) 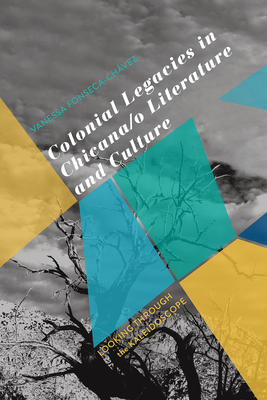 Colonial Legacies in Chicana/o Literature and Culture exposes the ways in which colonialism is expressed in the literary and cultural production of the U.S. Southwest, a region that has experienced at least two distinct colonial periods since the sixteenth century.

Vanessa Fonseca-Chávez traces how Spanish colonial texts reflect the motivation for colonial domination. She argues that layers of U.S. colonialism complicate how Chicana/o literary scholars think about Chicana/o literary and cultural production. She brings into view the experiences of Chicana/o communities that have long-standing ties to the U.S. Southwest but whose cultural heritage is tied through colonialism to multiple nations, including Spain, Mexico, and the United States.

While the legacies of Chicana/o literature simultaneously uphold and challenge colonial constructs, the metaphor of the kaleidoscope makes visible the rupturing of these colonial fragments via political and social urgencies. This book challenges readers to consider the possibilities of shifting our perspectives to reflect on stories told and untold and to advocate for the inclusion of fragmented and peripheral pieces within the kaleidoscope for more complex understandings of individual and collective subjectivities.

This book is intended for readers interested in how colonial legacies are performed in the U.S. Southwest, particularly in the context of New Mexico, Texas, and Arizona. Readers will relate to the book’s personal narrative thread that provides a path to understanding fragmented identities.

Vanessa Fonseca-Chávez is an assistant professor of English at Arizona State University. Her work focuses on colonialism, place studies, and the narratives of southwestern U.S. communities. She is co-editor of Spanish Perspectives on Chicano Literature: Literary and Cultural Essays and Querencia: Reflections on the New Mexico Homeland.

“Piecing together fragments of Chicana/o literary and cultural legacies via the metaphor of the kaleidoscope, Fonseca-Chávez asks what it means to truly consider how fragmented identities, colonial histories, and literary archives can lead to new decolonial insights and epistemologies. She offers a powerful reading of celebrated pre-Chicana/o and contemporary Chicana/o literature, historical monuments, and embodied practices, and shares her personal narrative to remind us how our colonial histories continue to haunt us. Moving beyond the ‘Sins of our Fathers,’ Fonseca-Chávez raises critical questions about how, by bursting the kaleidoscope of our multilayered past, we can develop a new consciousness—one that exposes, deconstructs, and reenvisions Chicana/o/x and mestiza/o identity in the present.”—Karen R. Roybal, author of Archives of Dispossession: Recovering the Testimonios of Mexican American Herederas, 1848–1960

“Colonial Legacies in Chicana/o Literature and Culture does the difficult work of placing pre-Chicano texts such as Jovita González’s Dew on the Thorn in dialogue with later Chicanx, Indigenous, and Chicana texts. Doing so allows Fonseca-Chávez to directly address the politics and power of memory, representation, and canon. What is the relationship between the statue of ‘the Equestrian’ at the El Paso airport and the decolonial texts of Miguel Méndez, Jaisey Bates, and Emma Pérez? Fonseca-Chávez argues that by addressing literary heritages with eyes wide open, we can produce honest critiques of the canon. Only by doing so will we be able to account for the very diverse body that is Chicanx literature. In relation, only by doing so will we be able to form the critical coalitions we need as we move into the twenty-first century.”—Linda Heidenreich, author of “This Land Was Mexican Once”: Histories of Resistance from Northern California

This feature require that you enable JavaScript in your browser.
END_OF_DOCUMENT_TOKEN_TO_BE_REPLACED

END_OF_DOCUMENT_TOKEN_TO_BE_REPLACED

This feature require that you enable JavaScript in your browser.
END_OF_DOCUMENT_TOKEN_TO_BE_REPLACED