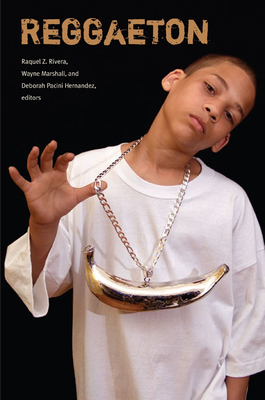 A hybrid of reggae and rap, reggaeton is a music with Spanish-language lyrics and Caribbean aesthetics that has taken Latin America, the United States, and the world by storm. Superstars-including Daddy Yankee, Don Omar, and Ivy Queen-garner international attention, while aspiring performers use digital technologies to create and circulate their own tracks. Reggaeton brings together critical assessments of this wildly popular genre. Journalists, scholars, and artists delve into reggaeton's local roots and its transnational dissemination; they parse the genre's aesthetics, particularly in relation to those of hip-hop; and they explore the debates about race, nation, gender, and sexuality generated by the music and its associated cultural practices, from dance to fashion.

The collection opens with an in-depth exploration of the social and sonic currents that coalesced into reggaeton in Puerto Rico during the 1990s. Contributors consider reggaeton in relation to that island, Panama, Jamaica, and New York; Cuban society, Miami's hip-hop scene, and Dominican identity; and other genres including reggae en espa ol, underground, and dancehall reggae. The reggaeton artist Tego Calder n provides a powerful indictment of racism in Latin America, while the hip-hop artist Welmo Romero Joseph discusses the development of reggaeton in Puerto Rico and his refusal to embrace the upstart genre. The collection features interviews with the DJ/rapper El General and the reggae performer Renato, as well as a translation of "Chamaco's Corner," the poem that served as the introduction to Daddy Yankee's debut album. Among the volume's striking images are photographs from Miguel Luciano's series Pure Plantainum, a meditation on identity politics in the bling-bling era, and photos taken by the reggaeton videographer Kacho L pez during the making of the documentary Bling'd: Blood, Diamonds, and Hip-Hop.

This feature require that you enable JavaScript in your browser.
END_OF_DOCUMENT_TOKEN_TO_BE_REPLACED

END_OF_DOCUMENT_TOKEN_TO_BE_REPLACED

This feature require that you enable JavaScript in your browser.
END_OF_DOCUMENT_TOKEN_TO_BE_REPLACED