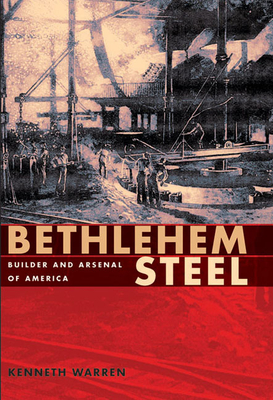 In the late 19th century, rails from Bethlehem Steel helped build the United States into the world's foremost economy. During the 1890s, Bethlehem became America's leading supplier of heavy armaments, and by 1914, it had pioneered new methods of structural steel manufacture that transformed urban skylines. Demand for its war materials during World War I provided the finance for Bethlehem to become the world's second-largest steel maker. As late as 1974, the company achieved record earnings of $342 million. But in the 1980s and 1990s, through wildly fluctuating times, losses outweighed gains, and Bethlehem struggled to downsize and reinvest in newer technologies. By 2001, in financial collapse, it reluctantly filed for Chapter 11 bankruptcy protection. Two years later, International Steel Group acquired the company for $1.5 billion.

In Bethlehem Steel, Kenneth Warren presents an original and compelling history of a leading American company, examining the numerous factors contributing to the growth of this titan and those that eventually felled it—along with many of its competitors in the U.S. steel industry.
Warren considers the investment failures, indecision and slowness to abandon or restructure outdated “integrated” plants plaguing what had become an insular, inward-looking management group. Meanwhile competition increased from more economical “mini mills” at home and from new, technologically superior plants overseas, which drove world prices down, causing huge flows of imported steel into the United States.

Bethlehem Steel provides a fascinating case study in the transformation of a major industry from one of American dominance to one where America struggled to survive.

Kenneth Warrenis Emeritus Fellow of Jesus College, University of Oxford. He is the author of numerous books, including: Industrial Genius: The Working Life of Charles Michael Schwab; Big Steel: The First Century of the United States Steel Corporation 1901-2001; and Wealth, Waste, and Alienation: Growth and Decline in the Connellsville Coke Industry.

“[Warren’s] research is impressive … students of industrial history will find Bethlehem Steel a revealing and timely work, defining challenges that all sorts of companies face today, across the U.S. and around the world.”
—The Wall Street Journal

“Bethlehem Steel is the definitive historical analysis of the late Bethlehem Steel Corporation. . . .  this volume traces the origins, rise, decline, and eventual fall of one of this nation’s iconic business organizations. . . . well written and superbly researched.”
—Pennsylvania Magazine of History and Biography

“The corporate biography of this icon of US industrial history is worthy of examination by history and business students and scholars. Highly recommended.”
—Choice

This feature require that you enable JavaScript in your browser.
END_OF_DOCUMENT_TOKEN_TO_BE_REPLACED

END_OF_DOCUMENT_TOKEN_TO_BE_REPLACED

This feature require that you enable JavaScript in your browser.
END_OF_DOCUMENT_TOKEN_TO_BE_REPLACED