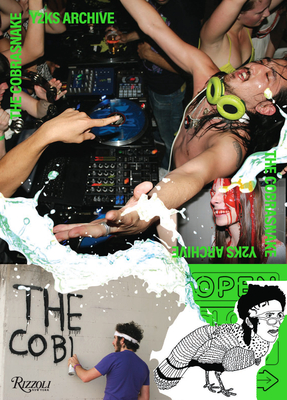 A love letter to a time before Instagram and the legendary party scenes of the 2000s that brought together the new millennium’s rising stars of pop culture.

Under the moniker the Cobrasnake, the photographer Mark Hunter captured the party scenes of Los Angeles and New York during the hipster-glam heyday of the 2000s—and in doing so defined the look of a generation.  Armed with just a Polaroid and a primitive website, Cobrasnake captured pioneers of youth culture from Kanye West and Steve Aoki to Jeremy Scott, Katy Perry, and Virgil Abloh—icons of the indie pop world in the making. Intimately connected with the people around him and keyed-in to the edgier fringes of the fashion, music, and art worlds, Hunter photographed influencers before they were influencers, in the wild and at play from the streets of LA to NYC and beyond. Collected here for the first time are more than three hundred of Cobrasnake’s favorite images alongside ephemera, from concert tickets and backstage passes to outtakes and unseen photographs from his many adventures. These photographs are records of the last generation of partiers to predate the livestreaming of culture afforded by today’s social media—capturing the energy and vibrancy of a time before Instagram.

Mark Hunter is a photographer who under the moniker of the Cobrasnake chronicled the party scenes of Los Angeles and New York in the 2000s. His work has appeared everywhere from editorials in Rolling Stone and Harper’s Bazaar to advertising campaigns for Calvin Klein and Helmut Lang. He lives in Los Angeles.

This feature require that you enable JavaScript in your browser.
END_OF_DOCUMENT_TOKEN_TO_BE_REPLACED

END_OF_DOCUMENT_TOKEN_TO_BE_REPLACED

This feature require that you enable JavaScript in your browser.
END_OF_DOCUMENT_TOKEN_TO_BE_REPLACED