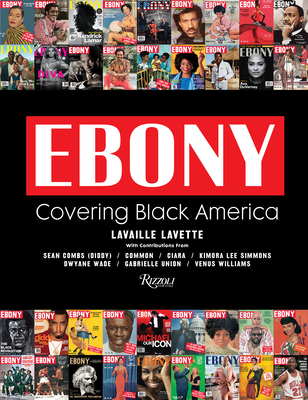 In 1945, Ebony's legendary founder John H. Johnson set out to create a magazine for Black America much like that of the trailblazing Life Magazine, and that he did.

For the African American community, Ebony has been a breath of fresh air, speaking on issues and events from the Black perspective, celebrating Black standards of beauty and elevating heroes of Black America--athletes, entertainers, activists, elected officials, or some combination thereof. Ebony: Covering Black America, by Lavaille Lavette, is a celebration of the treasure trove of the magazine's rich history, glamorous covers, groundbreaking cultural impact, and authentic coverage of Black American life from the magazine's inception to the present. "Ebony was Black America's social media long before the birth of Facebook, Twitter, and Instagram", says Lavette.

Unique in the quality of its photographs and contributors and chronicling everything from fashion and food to politics and social change, to sports and entertainment, Ebony: Covering Black America is a monumental milestone in African-American history and culture, and will be a treasured volume for the magazine's legion of loyal readers.

Lavaille Lavette is a best-selling author, educator, producer, social entrepreneur and the president and publisher of One Street Books and Ebony Magazine's imprint Ebony Publishing. With a master's in education, Lavaille is a former school district administrator, speechwriter, marketing executive, and she served as special advisor to the U.S. Secretary of Education, Dr. Rod Page (2001 -2005). Beyond her work in community engagement, nonprofit and the education spheres with her bestselling series, The Adventures of Roopster Roux, Lavette is co-founder of Every Child an Author, (ECAA) Class-by-Class, School by School. ECAA is on a mission to make every child in America a published author, one grade level at a time.

"...a breath of fresh air, speaking on issues and events from the Black perspective, celebrating Black standards of beauty and elevating heroes of Black America—athletes, entertainers, activists, elected officials, or some combination thereof." —L'OEILDELAPHOTOGRAPHIE.COM

"A lavish new photography book celebrates the legacy of the magazine that chronicled the extraordinary progress of Black America throughout the twentieth century - and beyond."
—BLIND MAGAZINE

"It's about America, but another shade of America. This is made even more powerful with the 75-year overview of every cover from 1945 to 2020—an incredible record of history." —IMPRINT.COM

"Lavette, a children’s book author and expert in educational marketing, here pays tribute to the magazine that was founded in 1945 as an outlet and podium for Black America." — NYT

"...pays tribute to the magazine that was founded in 1945 as an outlet and podium for Black America." — NEW YORK TIMES BOOK REVIEW

"...a look at 75 of the iconic magazine. The magazine broke new grounds when it made its debut, and provided a revelatory look at Black life in America." —APHROCHIC

"...a massive 304-page anthology that features all 600 Ebony magazine covers dating back to the first issue in November, 1945." —DAILY WORLD

"Perusing these vibrant covers, however, you quickly realize that they don’t just celebrate the Black community’s heroes—from Jackie Robinson to Martin Luther King Jr., to Aretha Franklin—and its pivotal moments, such as the unveiling of the 18-foot chancel mural of the Black Madonna and child on Easter 1967, or Bloody Sunday on the Edmund Pettus Bridge, in Selma, Alabama. They are a celebration of American history, and the Black community’s essential role in making it."
—AIRMAIL.COM

"Ebony magazine was a photo chronicle of its times, and Ebony: Covering Black America is a testament to the inextricable place Black people have in the American mainstream (and counterculture, too). As you may have gleaned from the subtitle, the book is a time capsule of the magazine’s most important covers, organized according to “Civil Rights and Social Justice,” “Love and Family,” “Ebony Man,” “Ebony Woman,” each introduced by a famous guest essayist (also featuring an afterword by Venus Williams), and peppered with quotations about the heritage and pride that was the magazine’s guiding light. Some of the covers are fascinating for who and what was considered newsworthy, with headlines like “Sarah Vaughn Adopts a Child,” “Family Life of the Jackson Five,” “Virginia’s First Negro Medical Grad.” Or the large number of covers with Muhammad Ali, and more with other Black boxing champs, or the multiples with singers Lena Horne and Aretha Franklin. Some covers are tinged with sadness, notably the issue devoted to the life and death of Dr. Martin Luther King Jr., for which his cover portrait partially covers the usually red Ebony nameplate, printed in funerary black...It's about America, but another shade of America. This is made even more powerful with the 75-year overview of every cover from 1945 to 2020—an incredible record of history."
— Steven Heller

This feature require that you enable JavaScript in your browser.
END_OF_DOCUMENT_TOKEN_TO_BE_REPLACED

END_OF_DOCUMENT_TOKEN_TO_BE_REPLACED

This feature require that you enable JavaScript in your browser.
END_OF_DOCUMENT_TOKEN_TO_BE_REPLACED