Baby, Let Me Follow You Down: The Illustrated Story of the Cambridge Folk Years (Paperback) 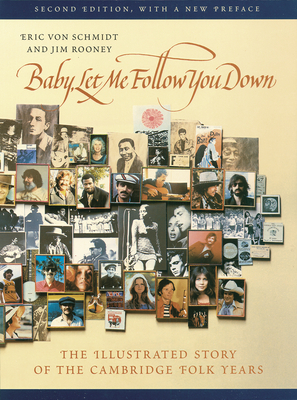 Long out of print, Baby, Let Me Follow You Down is a classic in the history of American popular culture. The book tells the story of the folk music community in Cambridge, Massachusetts, from its beginnings in living rooms and Harvard Square coffeehouses in the late 1950s to the heyday of the folk music revival in the early 1960s. Hundreds of historical photographs, rescreened for this edition, and dozens of interviews combine to re-create the years when Joan Baez, Bob Dylan, and a lively band of Cambridge folksingers led a generation in the rediscovery of American folk music.

Compiled by two musicians who were active participants in the Cambridge folk scene, the volume documents a special time in United States culture when the honesty and vitality of traditional folk music were combined with the raw power of urban blues and the high energy of electric rock and roll to create a new American popular music.

Eric von Schmidt, who died in 2007, was a singer-songwriter, painter, and graphic artist. He recorded seven solo albums and was the author of four children's books.Author of Bossmen: Bill Monroe and Muddy Waters, Jim Rooney is a music producer who has worked with Nanci Griffith, John Prine, Iris De Ment, Tom Paxton, Hal Ketchum, and others. In the early 1960s he managed the legendary Club 47 in Cambridge and was a director and talent coordinator of the Newport Folk Festival.

"A great history of the classic 1960s Boston folk scene by two of those who made it classic."—New England Folk Waves

"A lavish, comprehensive portrait of a particular place and time that shaped so much of the folk scene community today. . . . A masterpiece of oral history [that] demands a position on any folkie's must read list."—Folk Alliance Newsletter

This feature require that you enable JavaScript in your browser.
END_OF_DOCUMENT_TOKEN_TO_BE_REPLACED

END_OF_DOCUMENT_TOKEN_TO_BE_REPLACED

This feature require that you enable JavaScript in your browser.
END_OF_DOCUMENT_TOKEN_TO_BE_REPLACED