The John Deere Story: A Biography of Plowmakers John and Charles Deere (Hardcover) 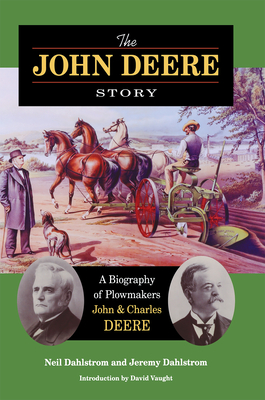 Today, John Deere is remembered-some say mistakenly-as the inventor of the steel plow. Who was this legendary man and how did he create the internationally renowned company that still bears his name? He began as a debt-stricken blacksmith who, fleeing debt in New England in the 1830s, set up shop in a little town on the Illinois frontier. There, in response to farmers' struggles, he designed a new plow that cut through the impervious prairie sod and lay open the rich, heavy soil for planting. The demand for his polished steel plow convinced him to specialize in farm implements.

In the decades before the Civil War, John Deere envisioned a company supplying midwestern farmers with reliable, affordable equipment. He used only high quality, imported steel and resisted pressure to raise prices. At the same time, he won respectful affection from his employees by working alongside them on the shop floor. Upon taking the helm in the 1860s, John's only surviving son, Charles, expanded the Moline factories to increase production, started branch houses in major midwestern cities to speed distribution, and began to transform the company into a modern corporation. The transformation didn't come without difficulties however: Charles found himself battling the Grange, facing threats of labor unions and strikes led by his own employees, and enduring patent suits and blatant thefts of product designs and advertising.

Jeremy Dahlstrom and Neil Dahlstrom, natives of "John Deere Country" in Moline, Illinois, tell this engaging, inspirational story of John and Charles Deere, shedding light on the two men as business partners and as a devoted father-and-son team. Historian David Vaught provides an introduction describing the role that Deere & Company played in the industrialization of American agriculture.

"A most useful addition to the literature on Deere and Company, and the environment in which the business operated."—Agricultural History Review

"Lucidly written ... an interesting picture of John and Charles in a concise and very readable book."—Journal of the Illinois State Historical Society

"[An] outstanding study in business history ... particularly illuminating on the close relations that bound industry to agriculture during the pioneering period of settlement in the Midwest. It is an enthralling story."—Indiana Magazine of History

This feature require that you enable JavaScript in your browser.
END_OF_DOCUMENT_TOKEN_TO_BE_REPLACED

END_OF_DOCUMENT_TOKEN_TO_BE_REPLACED

This feature require that you enable JavaScript in your browser.
END_OF_DOCUMENT_TOKEN_TO_BE_REPLACED