The 22 Immutable Laws of Marketing: Exposed and Explained by the World's Two (Paperback) 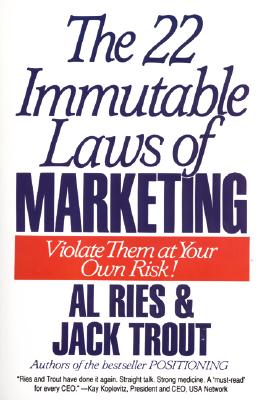 There are laws of nature, so why shouldn't there be laws of marketing?

As Al Ries and Jack Trout—the world-renowned marketing consultants and bestselling authors of Positioning—note, you can build an impressive airplane, but it will never leave the ground if you ignore the laws of physics, especially gravity. Why then, they ask, shouldn't there also be laws of marketing that must be followed to launch and maintain winning brands? In The 22 Immutable Laws of Marketing, Ries and Trout offer a compendium of twenty-two innovative rules for understanding and succeeding in the international marketplace. From the Law of Leadership, to The Law of the Category, to The Law of the Mind, these valuable insights stand the test of time and present a clear path to successful products. Violate them at your own risk.

Al Ries and his daughter and business partner Laura Ries are two of the world's best-known marketing consultants, and their firm, Ries & Ries, works with many Fortune 500 companies. They are the authors of The 22 Immutable Laws of Branding and The Fall of Advertising and the Rise of PR, which was a Wall Street Journal and a BusinessWeek bestseller, and, most recently, The Origin of Brands. Al was recently named one of the Top 10 Business Gurus by the Marketing Executives Networking Group. Laura is a frequent television commentator and has appeared on the Fox News and Fox Business Channels, CNN, CNBC, PBS, ABC, CBS, and others. Their Web site (Ries.com) has some simple tests that will help you determine whether you are a left brainer or a right brainer.

Authors Al Ries and Jack Trout are probably the world's best-known marketing strategists. Their books, including Marketing Warfare, Bottom-Up Marketing, Horse Sense, and Positioning have been published in more than fifteen languages and their consulting work has taken them into many of the world's largest corporations in North America, South America, and the Far East.

This feature require that you enable JavaScript in your browser.
END_OF_DOCUMENT_TOKEN_TO_BE_REPLACED

END_OF_DOCUMENT_TOKEN_TO_BE_REPLACED

This feature require that you enable JavaScript in your browser.
END_OF_DOCUMENT_TOKEN_TO_BE_REPLACED