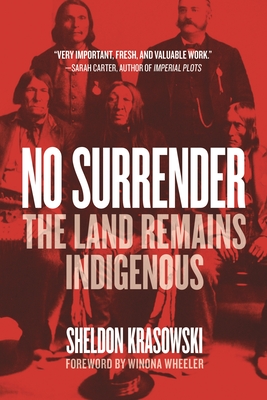 Between 1869 and 1877 the government of Canada negotiated Treaties One through Seven with the Indigenous peoples of the Great Plains. Many historians argue that the negotiations suffered from cultural misunderstandings between the treaty commissioners and Indigenous chiefs, but newly uncovered eyewitness accounts show that the Canadian government had a strategic plan to deceive over the "surrender clause" and land sharing. According to Sheldon Krasowski's research, Canada understood that the Cree, Anishnabeg, Saulteaux, Assiniboine, Siksika, Piikani, Kainaa, Stoney and Tsuu T'ina nations wanted to share the land with newcomers--with conditions--but were misled over governance, reserved lands, and resource sharing. Exposing the government chicanery at the heart of the negotiations, No Surrender demonstrates that the land remains Indigenous.

This feature require that you enable JavaScript in your browser.
END_OF_DOCUMENT_TOKEN_TO_BE_REPLACED

END_OF_DOCUMENT_TOKEN_TO_BE_REPLACED

This feature require that you enable JavaScript in your browser.
END_OF_DOCUMENT_TOKEN_TO_BE_REPLACED