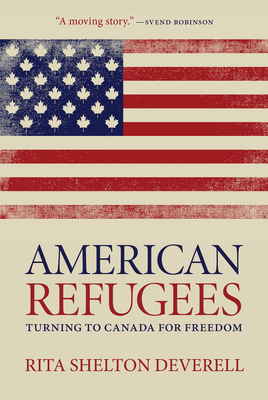 When it became clear that Donald Trump would become the new US president on election night in 2016, the website for Citizenship and Immigration Canada crashed. It was overwhelmed by Americans afraid that the United States would once again enter a period of intolerance and military aggression. In American Refugees, Rita Deverell shows that from the Revolutionary War to the Underground Railroad through to McCarthyism and Vietnam, Americans have fled to Canada in times of crisis. Many still flee. All have sought better lives, while helping to shape Canada into the country it is today.

Rita Shelton Deverell is a television broadcaster, social activist, and a founder of Vision TV. Deverell moved to Canada in 1967 from Houston, Texas, and has been named to the Maclean's Honour Roll of Outstanding Canadians, the Canadian Broadcasters' Hall of Fame, and the Order of Canada.

This feature require that you enable JavaScript in your browser.
END_OF_DOCUMENT_TOKEN_TO_BE_REPLACED

END_OF_DOCUMENT_TOKEN_TO_BE_REPLACED

This feature require that you enable JavaScript in your browser.
END_OF_DOCUMENT_TOKEN_TO_BE_REPLACED