Partners in Crime: The Rockefeller, CFR, CIA and Castro Connection to the Kennedy Assassination: The (Paperback) 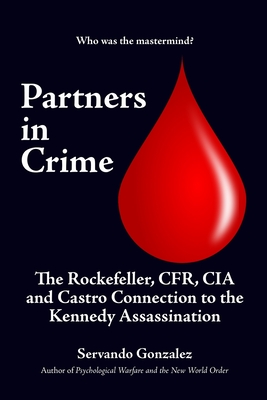 Most books about the assassination of President Kennedy written by "serious" authors and published by "prestigious" publishing houses fully agree with the Warren Commission's conclusions that Lee Harvey Oswald was a mentally disturbed individual who acted alone and there was no conspiracy surrounding him. Nonetheless, the few who blame the CIA, usually lefties and "progressives," never mention the key role played by important Council on Foreign Relations' members both in the assassination and the cover-up. They also purposely ignore Castro's role in the event, despite the fact that he was the only one among the suspects who publicly threatened the Kennedy brothers with assassination and had a long personal history of violence and a strong inclination to commit such a crime.

Moreover, none of these books adds to the list of suspects the man who created the CFR, the CIA and Castro: David Rockefeller. As you will see in this book, however, everything indicates that David Rockefeller was the evil mind who manipulated behind the shadows the forces that participated in the JFK assassination and its cover-up.

There are some things about this book that sets it apart from the close to 2000 books written about the Kennedy assassination. In the first place, it doesn't point to abstract organizations such as "the Establishment," "the military-industrial-complex," "the deep state," or "the CIA," as perpetrators, but as specific individuals inside some of these organizations.

Secondly, it brings abundant evidence showing that most of the people who participated in the cover-up which began just after the assassination and intensified after the Warren Commission's report, as well as in the post-cover-up, unleashed by Oliver Stone's film JFK, were members of the Council on Foreign Relations.

Finally, without discarding some of the motives for the JFK assassination mentioned by other authors -Kennedy planned to end the Vietnam War, he threatened to disband the CIA, printed currency not backed by the Fed- he added a main one not mentioned by any author before: President Kennedy was secretly trying to reach an agreement with Soviet Premier Khrushchev to end the Cold War.

This feature require that you enable JavaScript in your browser.
END_OF_DOCUMENT_TOKEN_TO_BE_REPLACED

END_OF_DOCUMENT_TOKEN_TO_BE_REPLACED

This feature require that you enable JavaScript in your browser.
END_OF_DOCUMENT_TOKEN_TO_BE_REPLACED