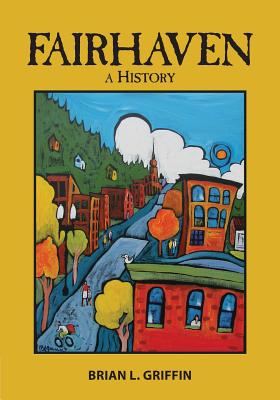 The complete history of that most southerly community on Bellingham Bay, one of the four original towns that were consolidated in 1904 to become the present City of Bellingham. Fairhaven, Washington-from the glaciers to today-the places, the participants, and the grand possibilities. A new arrival in 1889 said, "only crude raw beginnings, the primeval forest of giant firs and cedars barely pushed back to the hillsides, mud streets gouged out, raw with jumbled piles of burning stumps, flames and smoke obscuring the sky. On the beach, tents flap in the breeze and a few unpainted wooden structures suggest civilization is to come." In 2015, what would be recognizable to any of those old-timers would be the enterprising spirit of the latest inhabitants, who have done so much to create Fairhaven's modern growth and economic strength.

Brian Griffin was a natural to write Fairhaven. He has been a south-sider all of his life. He attended the Campus School when he was a boy. He graduated from Whitman College in 1954, with a major in English Literature, and then served a two-year hitch with the U.S. Army as a Counter Intelligence Corps Special Agent in Inchon, Korea. He married Marya Drew, then joined his father in the insurance business and spent the next 35 years as an insurance broker helping to found Griffin, Garrett, Johanson & Schacht, which morphed into the Unity Group Insurance, now HUB International. He was a founder and president of the Children's Company, a large retailer in the Sehome Mall and the Marysville Center. He also created Knox Cellars Native Bee Pollinators and wrote and illustrated two books about native bees. He has enjoyed many community activities and interests in a busy life. He led campaigns to build the Parkade, to improve the downtown with trees, bollards and bulged street corners, to acquire the Boulevard Park waterfront, to build Depot Market Square, and perhaps closest to his south-sider's heart, he led the charge to build Fairhaven Village Green. Brian's passion for local history has been a rewarding part of his life. It has led to the writing of four history books. For seven summers he has narrated the Whatcom Museum's Sunset History Cruises on Bellingham Bay, and in 2013 he curated the Whatcom Museum exhibition (and published the exhibition catalog for) 'Treasures From the Trunk, The J.J. Donovan Story'. He spends a great deal of time in his basement workshop crafting ukuleles that he sells worldwide through his website, GriffinUkuleles.com, and he enjoys playing his instruments with his friends in the Bellingham Ukulele Group (BUG). In 2015 he was honored by the City of Bellingham, receiving a Living Treasure designation at the Mayor's Art Awards ceremony.

This feature require that you enable JavaScript in your browser.
END_OF_DOCUMENT_TOKEN_TO_BE_REPLACED

END_OF_DOCUMENT_TOKEN_TO_BE_REPLACED

This feature require that you enable JavaScript in your browser.
END_OF_DOCUMENT_TOKEN_TO_BE_REPLACED