The Iron Will of Shoeshine Cats (Paperback) 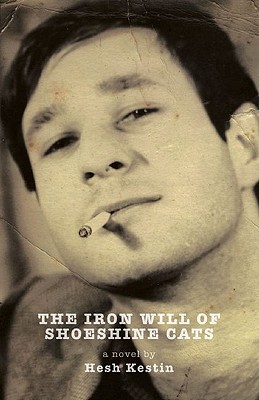 The Iron Will of Shoeshine Cats (Publishers Weekly 10/26/09)

From the author of the short fiction collection Based on a True Story comes a vibrant, hilarious addition to the genre of mob tragicomedy. Twenty-year-old Russell Newhouse, a quick-witted scholar and skirt-chaser, has New York's organized crime scene thrust upon him by a man called Shushan "Shoeshine" Cats, who interrupts a meeting of a Brooklyn Jewish men's society where Russell is serving as secretary. Shushan is in need of a favor and promptly takes Russell under his wing. What ensues is a classic boy-meets-mob story: part noir, part comedy, part epic. Kestin's richly layered characters--a monstrously obese German organized crime attorney named Frit von Zeppelin, a Jewish Texan who speaks in malapropisms, a dentist who anglicizes or Yiddishizes his name depending on his mood--are straight out of Dickens; his vivid attention to the details of place, New York, and time, 1963, is like poetic journalism; and his snappy, concise prose and dialogue is on par with Raymond Chandler. Kestin zips through Russell's sexual trysts, dealings in back rooms of Little Italy restaurants, and encounters with historical events like the JFK assassination with unflagging humor and insight. (Nov.)

Hesh Kestin's Based on a True Story was a Kansas City Star Top Ten Book of 2008.

Jewish gangsters in 1960s New York City. A fast-paced, funny look at a time when America still seemed young and moving forward. A smart young man is mentored by the gangster of his time.

Hesh Kestin is a recovering foreign correspondent who reported on local wars, global business and exotic mayhem in Europe, the Middle East and Africa for such publications as Forbes, Newsday and the Jerusalem Post, and wrote for US magazines as diverse as Playboy and Inc. Cited by Media Guide for best foreign correspondence, his work has garnered many awards.

"The Iron Will of Shoeshine Cats just may be the best book you never read. Think The Godfather on laughing gas, or Catch-22 with guns. It's also as good a novel about life in the 60s as you'll ever pick up. Witty, sexy, thrilling, and all story. You can't put the damn thing down. If you're still one of the blessed who reads for pleasure, get this book, because it's a pleasure to read."Stephen King

This feature require that you enable JavaScript in your browser.
END_OF_DOCUMENT_TOKEN_TO_BE_REPLACED

END_OF_DOCUMENT_TOKEN_TO_BE_REPLACED

This feature require that you enable JavaScript in your browser.
END_OF_DOCUMENT_TOKEN_TO_BE_REPLACED