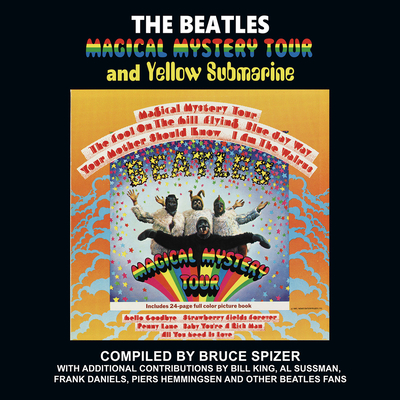 The Beatles Magical Mystery Tour and Yellow Submarine is the latest installment in the Beatles Album Series by Beatles historian Bruce Spizer. The book covers the songs and projects undertaken by the Beatles shortly after completion of their album Sgt. Pepper's Lonely Hearts Club Band in April 1967. In following ten months, the group wrote and recorded the song "All You Need Is Love" for the Our World TV program that was broadcast by satellite throughout the world, wrote the songs for and filmed the TV spectacular Magical Mystery Tour, wrote the songs for their feature length cartoon film Yellow Submarine, and recorded the songs "Lady Madonna" and "Across The Universe" before heading to India to study transcendental meditation in mid-February 1968. The book covers these remarkable achievements from the British, American, and Canadian perspectives, and includes chapters on the packaging of the albums and the writing and recording of the songs. It also has chapters on how the Beatles influenced our world, the friendly rivalry between the Beatles and the Rolling Stones, the Beatles Saturday morning cartoons, dozens of fan recollections, and more. The book has over 150 images.

Bruce Spizer has written eight critically acclaimed Beatles books, including The Beatles Records on Vee-Jay, The Beatles' Story on Capitol Records, The Beatles on Apple Records, and The Birth of Beatlemania in America. He has appeared on several national television programs (ABC's Good Morning America, CBS's Early Show, CNN, and Fox National News) and radio programs (NPR, ABC, BBC) as a Beatles expert and has given presentations in such venues as the Grammy Museum, the Rock 'N' Roll Hall of Fame and Museum, and Beatles conventions in the United States and Liverpool. Bruce serves a consultant on Beatles projects for Universal Music Group, Capitol records, and Apple Corps, Ltd. He lives in New Orleans, Louisiana.

This feature require that you enable JavaScript in your browser.
END_OF_DOCUMENT_TOKEN_TO_BE_REPLACED

END_OF_DOCUMENT_TOKEN_TO_BE_REPLACED

This feature require that you enable JavaScript in your browser.
END_OF_DOCUMENT_TOKEN_TO_BE_REPLACED