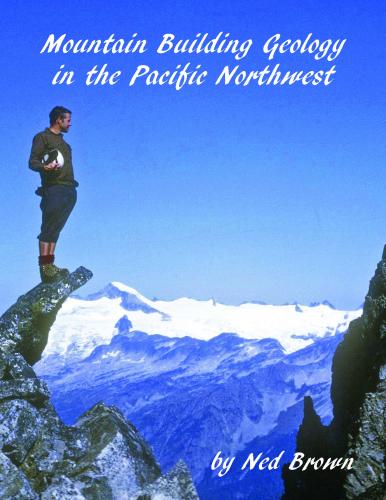 Mountain building driven by plate tectonics created the foundation of all continents on earth. In our backyard in western Washington and southern British Columbia, we have one of the great mountain ranges of the world. It is relatively young and active, and is marvelously exposed in three dimensions. This book presents an exploration of the bedrock geology—in maps, photos, and narrative—in a quest to unravel the origin of these mountains.
Our story starts with the adding-on of tracts of oceanic rock, “terranes”, to the ancestral North American margin as the Farallon ocean plate in the Pacific basin converged against the continent 250-170 million years ago. These terranes consist mostly of: (1) true ocean crust generated at ocean spreading ridges, and (2) island arc volcanoes, and related sedimentary basins, formed over “subduction zones” where the oceanic plate dives down. The terranes were joined onto the continental margin—“accreted”.
In the Pacific Northwest we have two assemblages of accreted terranes with different histories. In one group, sea floor and ocean arc terranes in the central North Cascades and B.C. Coast Mountains extending to Alaska, were accreted by obduction—they slid up over the ancient continental margin. Then from about 170 to 50 million years ago, this edge of the continent was invaded by tens of thousands of cubic miles of granitic magma in the form of “plutons”, defining a vast continental arc 1000 miles long: the “Coast Plutonic Complex”. The arc was fed by magma generated in a long-lived subduction zone. These rocks, plutons and terranes, were buried 20 miles, and came back up. Mystery and debate surround this burial process; subduction was not directly involved—plutonism or structural contraction are the leading contenders.
The other rock assemblage, known as the “Northwest Cascades thrust system”, is also made of ocean floor and island arc terranes, similar in age and origin to those in the first group. But these terranes accreted somewhere well south of, and are not part of, the Coast Plutonic Complex. From the ocean environment, they were carried down deeply in a subduction zone, and were metamorphosed at very high pressure, equating to more than 20 miles of burial. They were then exhumed and translated north along the coast as plate tectonic “slivers”, ending up as a package of thrust sheets emplaced over the south end of the Coast Plutonic Complex. Mt Shuksan is an iconic feature of this assemblage.

This feature require that you enable JavaScript in your browser.
END_OF_DOCUMENT_TOKEN_TO_BE_REPLACED

END_OF_DOCUMENT_TOKEN_TO_BE_REPLACED

This feature require that you enable JavaScript in your browser.
END_OF_DOCUMENT_TOKEN_TO_BE_REPLACED