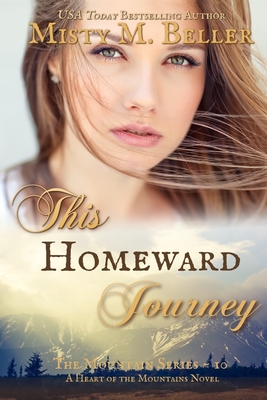 This is book number 10 in the Mountain series.

After her husband's death, Rachel Gray is finally free from the turmoil his addictions caused. She wants nothing more than a new life with her twelve-year-old son. If she can reach her brother in the wilderness of the Canadian territories, they'll have help to start over in peace. She knows better than to put her life in the hands of another man, but she never expected the Montana mountains to be so treacherous. When two brothers invite her to join their small group traveling to the same area, she refuses. After she and her son narrowly escape a bear attack, she's forced to admit they need the safety of numbers in this untamed land. If the men prove dangerous, she can always leave with her son and strike out alone again.

Seth Grant has made some bad choices in his life, but God healed him from the addiction that mired him in his sins. Now, he's determined to live the life God called him to, starting with a journey northward to see the Canadian mountain both his brother and sister have fallen in love with. When he discovers the woman and boy who plan to travel the same mountain trail, he can't fathom why she refuses to join in the safety of their larger group. Though her decision seems unwise, he has no other choice but to pray God provides her protection.

Despite Rachel's best efforts, she can't seem to fight her attraction to the Seth--until a secret from his past proves he's not at all the man she thought. When a new peril threatens her son's life, she must choose between trusting in what she can control, or the man who her heart says is trustworthy, no matter his previous sins. The path she chooses just may determine whether she can step into the new life God has in store for them all.

This feature require that you enable JavaScript in your browser.
END_OF_DOCUMENT_TOKEN_TO_BE_REPLACED

END_OF_DOCUMENT_TOKEN_TO_BE_REPLACED

This feature require that you enable JavaScript in your browser.
END_OF_DOCUMENT_TOKEN_TO_BE_REPLACED