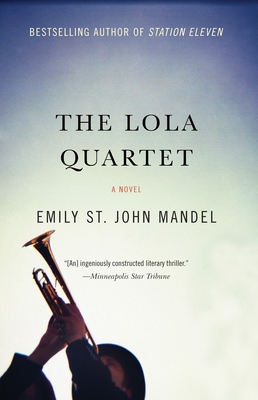 “In her latest, St. John Mandel shows how relationships formed in high school, so often fraught with drama, can ebb and flow and fade and come back to haunt. Among her characters, the perception of what's important and the potential impact of actions varies widely, and something as seemingly insignificant as a photograph can become riddled with layers of meaning, differing for each person who sees it. The writing is taut, the characters well wrought, and St. John Mandel's characteristic infusions of moral ambiguity and complexity remind us, as good novels should, of what it means to be human.”
— Emily Pullen, Skylight Books, Los Angeles, CA

Gavin Sasaki was a promising young journalist in New York City until the day he was fired for plagiarism. The last thing he wants is to sell foreclosed real estate for his sister Eilo’s company in their Florida hometown, but he’s in no position to refuse her job offer. Plus, there’s another reason to go home: Eilo recently met a ten-year-old girl who looks very much like Gavin and has the same last name as his high-school girlfriend, Anna, who left town abruptly after graduation.

Determined to find out if this little girl might be his daughter, Gavin sets off to track down Anna, starting with the three friends they shared back when he was part of a jazz group called “The Lola Quartet.” As Gavin pieces together their stories, he learns that Anna has been on the run for good reason, and soon his investigation into her sudden disappearance all those years ago takes a seriously dangerous turn.

Emily St. John Mandel was born in British Columbia, Canada. Her most recent novel, Station Eleven, was a finalist for a 2014 National Book Award and a New York Times bestseller. Her previous novels were Last Night in Montreal, The Singer’s Gun, and The Lola Quartet. She is a staff writer for The Millions, and her work has appeared in numerous anthologies, including The Best American Mystery Stories 2013and Venice Noir. She lives in New York City with her husband.

“[An] elegant, hypnotic novel. . . . An elegy for lost—and perhaps only imagined—innocence.” —The Washington Post

“Compelling. . . . Perhaps all novelists can be said to wrestle with morality; Mandel seems to wrestle with it at greater length and in greater depth than most. . . . First-rate fiction.” —Dallas Morning News

“A novel noir that wears its influences proudly on the beige sleeve of its trench coat…. Delightful.” —Paste

“[Mandel] is a stunningly beautiful writer whose complex, flawed, and well-drawn characters linger with you.” —Sarah McCarry, Tor.com

“Riveting. . . . Evocative, intriguing, and complex, this novel is as smooth as the underbelly of a deadly, furtive reptile.” —Library Journal (starred review)

“Result[s] in both sophistication and suspense.” —Publishers Weekly

This feature require that you enable JavaScript in your browser.
END_OF_DOCUMENT_TOKEN_TO_BE_REPLACED

END_OF_DOCUMENT_TOKEN_TO_BE_REPLACED

This feature require that you enable JavaScript in your browser.
END_OF_DOCUMENT_TOKEN_TO_BE_REPLACED