This feature require that you enable JavaScript in your browser.
END_OF_DOCUMENT_TOKEN_TO_BE_REPLACED

Bulleit Proof: How I Took a 150-Year-Old Family Recipe and a Revolver, and Disrupted the Entire Liquor Industry One Bottle, One Sip, (Hardcover) 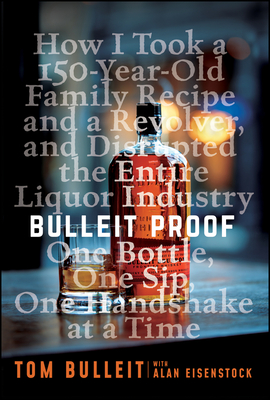 By Alan Eisenstock (With), Tom Bulleit
$25.00
On Our Shelves Now

The compelling story of how one man took a 150-year-old family recipe and disrupted the entire liquor industry one sip, one bottle, one handshake at a time

Tom Bulleit stood on a stage before a thousand people inside a tent the size of a big-top. It was both his thirtieth wedding anniversary and his birthday. But there was another thing to celebrate: the dedication of the new Bulleit Distillery in Shelbyville, Kentucky. His great-great-grandfather, Augustus, created his first batch of Bulleit Bourbon around 1830. A century and a half later, Tom fulfilled his lifelong dream, revived the old family bourbon recipe, and started Bulleit Distilling Company. Eventually, Tom was named a member of the Honorable Order of Kentucky Colonels, and elected to the Kentucky Bourbon Hall of Fame. Thinking back on all his achievements, Tom was overcome by a wave of emotion. He looked into the sea of faces and said, "I don't believe our lives are told in years. . . or months. . . or weeks. I believe we live our lives in moments.

Tom's book Bulleit Proof is just that--a life told in moments. Moments of joy, triumph, hardship, persistence, and success. His is a story of survival in war, in business, in life. Tom faced death twice: in a foxhole and in a cancer ward. In Bulleit Proof, Tom reveals all, pulls no punches, and lets you into his heart. In this book, you will:

Bulleit Proof is a fast-paced page-turner--not only for fans of Bulleit Bourbon and admirers of Tom, but for anyone who loves an emotional, hilarious, inspirational, and deeply honest story.

END_OF_DOCUMENT_TOKEN_TO_BE_REPLACED

This feature require that you enable JavaScript in your browser.
END_OF_DOCUMENT_TOKEN_TO_BE_REPLACED