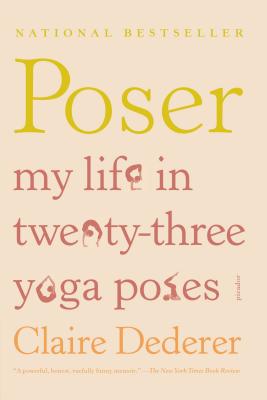 Ten years ago, Claire Dederer put her back out while breastfeeding her baby daughter. Told to try yoga by everyone from the woman behind the counter at the co-op to the homeless guy on the corner, she signed up for her first class. She fell madly in love.

Over the next decade, she would tackle triangle, wheel, and the dreaded crow, becoming fast friends with some poses and developing long-standing feuds with others. At the same time, she found herself confronting the forces that shaped her generation. Daughters of women who ran away to find themselves and made a few messes along the way, Dederer and her peers grew up determined to be good, good, good—even if this meant feeling hemmed in by the smugness of their organic-buying, attachment-parenting, anxiously conscientious little world. Yoga seemed to fit right into this virtuous program, but to her surprise, Dederer found that the deeper she went into the poses, the more they tested her most basic ideas of what makes a good mother, daughter, friend, wife—and the more they made her want something a little less tidy, a little more improvisational. Less goodness, more joy.

Poser is unlike any other book about yoga you will read—because it is actually a book about life. Witty and heartfelt, sharp and irreverent, Poser is for anyone who has ever tried to stand on their head while keeping both feet on the ground.

Claire Dederer is the author of Poser: My Life in 23 Yoga Poses. Her essays, criticism, and reporting have appeared in Vogue, The New York Times, Slate, Salon, Yoga Journal, Real Simple, The Nation and in newspapers around the country. She has taught writing at the University of Washington. A fourth-generation Seattle native, she lives with her family on Bainbridge Island in Puget Sound.

“[A] fine first memoir, and it's heartening to see a serious female writer take such a risky step into territory where writers of literary ambition fear to tread, lest they be dismissed as trivial . . . [What] makes Poser work on a lot of levels is that first in line to ask searching questions and poke fun is the author herself . . . Poser is a powerful, honest, ruefully funny memoir about one woman's openhearted reckoning with her demons . . . In the hands of a gifted writer, the universal is embedded within the personal. Guess what? Your bad wallpaper made for a lovely book.” —Dani Shapiro, The New York Times Book Review

“Let me be honest about something: I love yoga, I live for yoga, and yoga has changed my life forever--but it is very difficult to find books about yoga that aren't incredibly annoying. I'm sorry to say it, but yoga sometimes makes people talk like jerks. Thank goodness, then, for Claire Dederer, who has written the book we all need: the long-awaited funny, smart, clear-headed, thoughtful, truthful, and inspiring yoga memoir. To simplify my praise: I absolutely loved this book.” —Elizabeth Gilbert, author of Eat, Pray, Love

“Why did Claire Dederer take up yoga? Short answer: for the same kinds of reasons that Elizabeth Gilbert changed her life in Eat, Pray, Love, and to much the same funny, charming, self-deprecating, stealthily inspirational and (quite possibly) best-selling effect . . . This appealing writer's first book is long overdue. It's clear from the start that she will be transformed and find a sensible, spiritual nonsappy way to become a devotee before Poser is over.” —Janet Maslin, The New York Times

“This book is going to be big. Claire Dederer manages to pack everything into this personal memoir: childbirth, money, schools, social class, career anxiety, parenting, sex, friendship, marriage, and yes, yoga. And don't forget Dansko clogs--‘always, always, [the] clogs.' Thousands of American mothers share Dederer's experience as they glance up from their darling, maddening new babies to find themselves in a new sphere: hip, progressive, trying-really-hard-to-do-it-right mom-world. Poser is written for them . . . From the bendier-than-thou instructors to the more-locavore-than-thou preschool parents, Dederer captures everyone in her world with humanity and gentle wit. So many readers will relate to her story; not just the long minutes spent in downward dog or the hours lost wandering the aisles of Whole Foods, but the years of pondering the mysteries of family relationships, past and present. And the fleeting moments spent staying, as the yogis say, focused on the breath.” —Buzzy Jackson, The Boston Globe

“Poser achieves something rare: It's a contemporary book about yoga that doesn't leave you squirming, suspect or bored . . . The illusion of commiseration here is really just a triumph of truth-telling, of a writer having the courage to confront her limits and sit, uncritically, in the messy present. Like a yoga pose, it doesn't have to be perfect to be exquisite.” —Lewis Mernit, Los Angeles Times

“As a yoga-culture skeptic, I began this book with a certain dread of encountering breathless, self-righteous platitudes, but I was immediately charmed and disarmed by Claire Dederer's fiercely intelligent, funny, unsentimental voice. This book contains real, hard-won insights; yoga became, for Dederer, a rebellion against goodness, not a path to it. This story of her revolt against perfectionism is a joy to behold and a true inspiration.” —Kate Christensen, author of The Great Man and The Epicure's Lament

“[A] warm and funny memoir . . . Dederer is a gifted storyteller, not just for her turns of phrase or her ubiquitous humor. Her memoir reads like a rich conversation with a friend, moving from laughter to quiet reflection and back again. She remains utterly relatable and real, and to that I say, Namaste.” —Kim Schmidt, Star-Tribune (Minneapolis)

“[Poser has] the gravitational pull of a good novel and an unusually genuine voice that envelops the reader swiftly . . . Dederer sparkles when introspection is ruthless--the result reads true and funny.” —Kimberly Marlowe Hartnett, The Seattle Times

“This funny, spectacularly well-observed, and moving book does what even yoga can't: it provides solace while making you laugh. I feel three inches taller.” —Henry Alford, author of How to Live

“Claire Dederer is all these women: a daughter attempting to make sense of an irresistibly nutty divorce; a new mother trying to meet the standards of a peculiarly liberal breed of über-moms; a wife struggling to salvage intimacy in a marriage slammed by exhaustion, mortgage payments, and encroaching in-laws; and a lost soul who stumbles into a yoga studio and finds salvation. Above all, Dederer is a brilliant writer whose prose sparkles and cuts deep. Poser is a book you will want to immediately share with your friends. It's hilarious, unflinching, and bursting with love.” —Maria Semple, author of This One Is Mine

“Poser is a bracingly honest investigation of family and freedom, parenting and perfectionism. It is also funny enough to make most writers swoon with envy.” —James Marcus, author of Amazonia

“[An] enjoyable memoir about life and the provocations of childbirth made palatable with yoga poses. . . . Through ‘coronal planes,' sutras and savasanas, from downward dog to lotus poses, Dederer contributes nuggets of yoga trivia paired with a droll, self-effacing delivery that's both down-to-earth and pleasingly introspective. Delicious fun with a friendly nudge for readers on the fence about yoga.” —Kirkus Reviews

“Dederer's humor is tangy and precision-aimed; her targets are the sine qua non of memoirs: mothers and marriage. A book reviewer and social critic with bylines in the New York Times, Slate, and Vogue, Dederer acidly deconstructs hip, politically correct Seattle . . . Dederer writes superbly and offers sharp insights into family dynamics as well as hatha yoga's impact on American life, the focus of a growing number of groundbreaking books.” —Donna Seaman, Booklist

“[Dederer] writes with a directness that is rarely less than compelling. And she's genuinely funny. . . With wry humor and an utter lack of pretense, she navigates a path between and beyond orthodoxies, anchored in love and family, open to possibility. ‘Poser' will find a devoted following among women weary of pronouncements and prescriptions.” —Janice P. Nimura, Newsday

“If you've every done a downward dog on a sticky mat, you will laugh.” —Jennie Yabroff, Newsweek

“In any case, Dederer's book is only tangentially about yoga. It could just as easily have been called ‘How to Be a Perfect Mom, Wife and Daughter in the Uber-Liberal Confines of the Pacific Northwest.' . . . Dederer proves an effective storyteller. She knows how to set up a punch line, how to foreshadow a big moment, how to create drama out of the everyday bits of a life. Yoga is the catalyst, the act that repeatedly forces her to look inward.” —Bill Eichenberg, Cleveland Plain Dealer

“Dederer is a mother with the heart of a poet.” —Michael Pearson, The Virginian-Pilot

“Poser, which tells the story of Claire's attempt to become absolutely perfect at yoga--and, by extension, life--is knocking me out. It's very funny about yoga culture and disarmingly honest about how complicated marriage and family life can be.” —Peter Terzian, "Culture Diary," The Paris Review