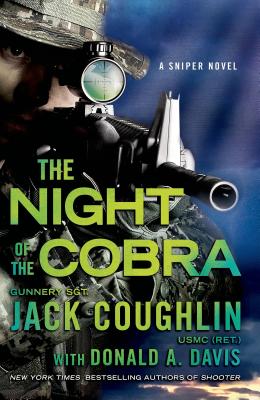 This is book number 8 in the Kyle Swanson Sniper Novels series.

In this enthralling new novel in the bestselling Kyle Swanson sniper series, an American warrior is called to redeem a debt of honor in Somalia amid haunting personal nightmares.

Top-ranked sniper Kyle Swanson was a promising young Marine on a dangerous peace-keeping mission in Mogadishu when he first captured "the Cobra" and a life-long blood feud began.

Twenty years later, Kyle works for the CIA while the Cobra emerges from prison to become an efficient killing machine, and has never slackened his hatred for Swanson. To draw out his ultimate target, the Cobra launches a violent campaign against the United States and attacks the second-largest shopping mall in America.

Kyles teams with FBI agent Lucky Sharif, whom Swanson had saved as a child in Somalia, and they must fight through terrorists at home and abroad to stop his old enemy. The Cobra retreats to Somalia, where he is set to become a powerful warlord and leader of the bloody al Shabaab terror gang. To block him, Swanson must return to the daunting streets of Mogadishu-where he must face his personal nightmares, as well as the Cobra, who lies in wait.

Gunnery Sgt. Jack Coughlin's autobiography, Shooter, describes his experiences as the top-ranked marine sniper in the Iraq War. Coughlin is also the author, with Donald A. Davis, of the Kyle Swanson Sniper Novels, including Long Shot and In the Crosshairs. Coughlin grew up in Waltham, Massachusetts, and joined the Marines when he was 19. He served with the Marines during the drive to Baghdad and has operated on a wide range of assignments in hot spots around the world.

Donald A. Davis is co-author of New York Times bestseller Shooter: The Autobiography of the Top-Ranked Marine Sniper and author of Lightning Strike: The Secret Mission to Kill Admiral Yamamoto and Avenge Pearl Harbor. He lives outside Boulder, Colorado.

“Kyle Swanson returns for his boldest and best adventure yet. . . . Coughlin and Davis' series only gets better with each installment. Series fans will devour this one, but new readers will enjoy it just as much, as knowledge of prior novels in the series is not required. A great military thriller for anyone with a little time to kill.” —Booklist (starred review) on Time to Kill

“The latest Kyle Swanson sniper thriller might be the best yet. . . . Quickly paced and tightly written, this one is a definite winner for all fans of the military action thriller.” —Booklist on Running the Maze

“Coughlin and Davis (An Act of Treason, 2011, etc.) hit the action-adventure 10-ring again.” —Kirkus Reviews on Running the Maze

“The latest Kyle Swanson sniper thriller might be the best yet. . . . Quickly paced and tightly written, this one is a definite winner.” —Booklist on Running the Maze

“A strong and compelling narrative. Coughlin and Davis have concocted another winner that should only encourage a growing readership. ” —Booklist on Clean Kill

This feature require that you enable JavaScript in your browser.
END_OF_DOCUMENT_TOKEN_TO_BE_REPLACED

END_OF_DOCUMENT_TOKEN_TO_BE_REPLACED

This feature require that you enable JavaScript in your browser.
END_OF_DOCUMENT_TOKEN_TO_BE_REPLACED