Alibaba's World: How a Remarkable Chinese Company is Changing the Face of Global Business (Hardcover) 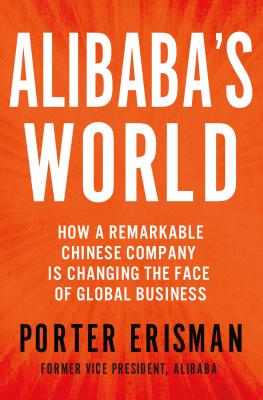 By Porter Erisman
Email or call for price
Out of Print

In September 2014, a Chinese company that most Americans had never heard of held the largest IPO in history – bigger than Google, Facebook and Twitter combined. Alibaba, now the world's largest e-commerce company, mostly escaped Western notice for over ten years, while building a customer base more than twice the size of Amazon's, and handling the bulk of e-commerce transactions in China. How did it happen? And what was it like to be along for such a revolutionary ride?

In Alibaba's World, author Porter Erisman, one of Alibaba's first Western employees and its head of international marketing from 2000 to 2008, shows how Jack Ma, a Chinese schoolteacher who twice failed his college entrance exams, rose from obscurity to found Alibaba and lead it from struggling startup to the world's most dominant e-commerce player. He shares stories of weathering the dotcom crash, facing down eBay and Google, negotiating with the unpredictable Chinese government, and enduring the misguided advice of foreign experts, all to build the behemoth that's poised to sweep the ecommerce world today. And he analyzes Alibaba's role as a harbinger of the new global business landscape—with its focus on the East rather than the West, emerging markets over developed ones, and the nimble entrepreneur over the industry titan. As we face this near future, the story of Alibaba—and its inevitable descendants—is both essential and instructive.

Prior to joining Alibaba in 2000, PORTER ERISMAN worked for Ogilvy & Mather in Beijing. From 2000-2008, Porter worked as a Vice President at Alibaba.com and Alibaba Group, at various times leading the company's international website operations, international marketing, and corporate affairs as one of the company's first American employees. He is the writer/director of Crocodile in the Yangtze, an award-winning documentary about the rise of Alibaba and its famous founder, Jack Ma. An expert on ecommerce in emerging markets, he has consulted to ecommerce companies in Africa, Asia and Latin America. He lives in Shanghai, China.

Erisman is the bestselling author of Alibaba’s World: How a Remarkable Chinese Company is Changing the Face of Global Business.

“Fascinating...stories don't get much better than Alibaba's.” —The Financial Times

“Few westerners have had the opportunity to be in the inner sanctum of a Chinese company. Erisman makes you feel like you were there through the all trials and tribulations -- from Alibaba's humble origins to its David vs Goliath meetings with the chiefs of eBay, Google and Yahoo, to its remarkable arrival as Internet titan. A must-read, full of practical learning for anyone seeking to understand Chinese entrepreneurship or build the business of their dreams.” —Nick Arnold, former Head of Marketing, Apple Asia

“A fascinating insider's look at the digital opening of China...Erisman's comprehensive account of "how a schoolteacher rose from obscurity to build the world's largest e-commerce company" provides a dizzying look at this company's startling birth, growth, and success.” —Publisher's Weekly

“An absolute delight to read. Porter Erisman has crafted an insider's loving portrayal of the world's largest e-commerce site, from its humble beginnings in Hong Kong and rural China to its present-day dominance of the online China trade... The book is written in a fresh, engaging style that creates a sense of immediacy and empathy for Alibaba's team. If you like a well-written business yarn, read Alibaba's World. It's how the East was won.” —The New York Journal of Books

“It is difficult to imagine anyone more qualified than Porter Erisman to provide Westerners with deep insight into one of the greatest business stories of China, and of this century. That Porter happens to be an extremely engaging writer with a wry and savvy eye makes this not only a must-read, but an utterly enjoyable one too.” —Janet Yang, film producer of THE JOY LUCK CLUB and PEOPLE VS. LARRY FLINT

This feature require that you enable JavaScript in your browser.
END_OF_DOCUMENT_TOKEN_TO_BE_REPLACED

END_OF_DOCUMENT_TOKEN_TO_BE_REPLACED

This feature require that you enable JavaScript in your browser.
END_OF_DOCUMENT_TOKEN_TO_BE_REPLACED