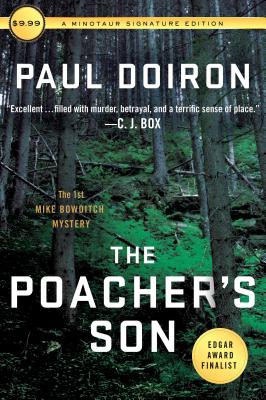 This is book number 1 in the Mike Bowditch Mysteries series.

“Martin Bowditch is a Maine Game Warden but his life is not a bucolic paradise. The deep woods contain the same crime and violence that pervade the rest of society and Martin must combat it along with a simmering family history that threatens to overwhelm him in this suspenseful, outstanding debut.”
— Bill Cusumano, Nicola's Books, Ann Arbor, MI

Paul Doiron's The Poacher's Son is a sterling debut of literary suspense. Taut and engrossing, it represents the first in a series featuring Mike Bowditch.

Set in the wilds of Maine, this is an explosive tale of an estranged son thrust into the hunt for a murderous fugitive—his own father

Game warden Mike Bowditch returns home one evening to find an alarming voice from the past on his answering machine: his father Jack, a hard drinking womanizer who makes his living poaching illegal game. An even more frightening call comes the next morning from the police: they are searching for the man who killed a beloved local cop the night before—and his father is their prime suspect. Jack has escaped from police custody, and only Mike believes that his tormented father might not be guilty.

Now, alienated from the woman he loves, shunned by colleagues who have no sympathy for the suspected cop-killer, Mike must come to terms with his haunted past. He knows firsthand Jack's brutality, but is the man capable of murder? Desperate and alone, he strikes up an uneasy alliance with a retired warden pilot, and together the two men journey deep into the Maine wilderness in search of a runaway fugitive. But the only way for Mike to save his father is to find the real killer—which could mean putting everyone he loves in the line of fire.

*BONUS CONTENT: This edition of The Poacher's Son includes a new introduction from the author and a discussion guide.

A native of Maine, bestselling author PAUL DOIRON attended Yale University, where he graduated with a degree in English. The Poacher’s Son, the first book in the Mike Bowditch series, won the Barry award, the Strand award for best first novel, and has been nominated for the Edgar, Anthony, and Macavity awards in the same category. He is a Registered Maine Guide specializing in fly fishing and lives on a trout stream in coastal Maine with his wife, Kristen Lindquist.

“With precise and evocative prose, Paul Doiron weaves a riveting tale set deep in the wilderness that can be the tenuous bond between father and son. This is a compelling, moving, and utterly impressive debut!” —Andre Dubus III, author of The House of Sand and Fog

“The Poacher's Son is a gripping, original, and literate tale of love and loyalty, betrayal and redemption. You won't want to put it down.” —John Lescroart, author of A Plague of Secrets

“One of the best-written debut novels I've read in years. This story has it all--a great plot, a wonderful Maine woods setting, and a truly remarkable and believable cast of characters.” —Nelson DeMille, author of The Gate House

“Doiron takes a provocative look at the ties between fathers and sons, unconditional love, and Maine's changing landscape in his outstanding debut. . . . Fans of C.J. Box and Nevada Barr will appreciate the vivid wilderness scenes.” —Publishers Weekly (starred review)

“The Poacher's Son is a haunting tale, and Paul Doiron is a powerful and evocative writer.” —Tess Gerritsen, author of The Keepsake

“Paul Doiron is a spellbinding new storyteller whose literate, intelligent novel will have readers begging for more.” —Julia Spencer-Fleming, Edgar finalist and author of I Shall Not Want

“A Maine Game Warden [Mike Bowditch] fights to clear his no-account father of murder charges in this deeply felt actioner. . . . His decision leads to a series of disastrously self-destructive actions that Doiron makes perfectly credible, all interspersed with a series of flashbacks to Mike's childhood that are both tender and chilling. C.J. Box goes East. Like Box, Doiron will have his hands full trying to top his accomplished debut.” —Kirkus Reviews (starred review)

“An outstanding gripping debut . . . The Poacher's Son moves at a brisk pace with unpredictable but realistic twists that reach a crescendo at the shocking finale. . . . one of the best debuts of the year.” —Sun Sentinel

“With realistically flawed characters and a strong sense of place the novel avoids tourist stereotyping, of Maine itself and its citizens. . . . One hopes this fine novel is the first in a series starring Warden Bowditch, who could quickly become the East Coast version of C. J. Box's game-warden hero Joe Pickett, who patrols the range in Wyoming.” —Booklist (starred review)

“Impressive. . . . The setting is wildly atmospheric, the pacing swift and the characters well drawn. The Poacher's Son is easily one of the best debut novels in recent memory.” —BookPage

“[An]impressive debut . . . there are plenty of twists and surprises to keep the reader guessing until the very end.” —RT Book Review (four stars)

“Stocked with excitement and trepidation . . . pure nail-biting fun. . . . Loaded with unexpected twists, The Poacher's Son takes you to the edge and leaves you begging for more. . .” —BookBrowse

“Engaging . . . Doiron could do for Maine what the late Tony Hillerman did for the Southwest in his mysteries featuring Joe Leaphorn and Jim Chee.” —Bangor Daily News