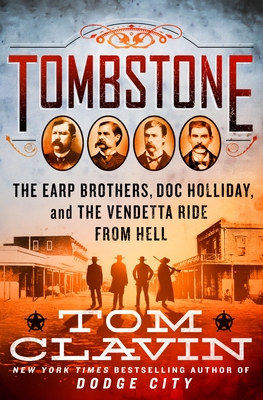 “With a former newsman’s nose for the truth, Clavin has sifted the facts, myths, and lies to produce what might be as accurate an account as we will ever get of the old West’s most famous feud.” —Associated Press

The true story of the Earp brothers, Doc Holliday, and the famous Battle at the OK Corral, by the New York Times bestselling author of Dodge City and Wild Bill.

On the afternoon of October 26, 1881, eight men clashed in what would be known as the most famous shootout in American frontier history. Thirty bullets were exchanged in thirty seconds, killing three men and wounding three others.

The fight sprang forth from a tense, hot summer. Cattle rustlers had been terrorizing the back country of Mexico and selling the livestock they stole to corrupt ranchers. The Mexican government built forts along the border to try to thwart American outlaws, while Arizona citizens became increasingly agitated. Rustlers, who became known as the cow-boys, began to kill each other as well as innocent citizens. That October, tensions boiled over with Ike and Billy Clanton, Tom and Frank McLaury, and Billy Claiborne confronting the Tombstone marshal, Virgil Earp, and the suddenly deputized Wyatt and Morgan Earp and shotgun-toting Doc Holliday.

Bestselling author Tom Clavin peers behind decades of legend surrounding the story of Tombstone to reveal the true story of the drama and violence that made it famous. Tombstone also digs deep into the vendetta ride that followed the tragic gunfight, when Wyatt and Warren Earp and Holliday went vigilante to track down the likes of Johnny Ringo, Curly Bill Brocius, and other cowboys who had cowardly gunned down his brothers. That "vendetta ride" would make the myth of Wyatt Earp complete and punctuate the struggle for power in the American frontier's last boom town.

“Clavin’s out to dispel the myths…[interjecting] some wry commentary into his breezy narrative style…It’s all through fascinating lore. And would you believe that the gunfight at the OK Corral didn’t even take place at the OK Corral?” —NPR

“With a former newsman’s nose for the truth, Clavin has sifted the facts, myths, and lies to produce what might be as accurate an account as we will ever get of the old West’s most famous feud.” —Associated Press

“Clavin shows that there is more to the story of Tombstone than the Earps and the well-known gunfight. Readers who enjoyed the first two books in this popular history trilogy will look forward to this excellent and fitting conclusion.’” —Library Journal

"Rootin'-tootin' history....Updating the old notion that the Earp myth is the American Iliad, the author is at his best when he delineates those fraught spasms of violence. Buffs of the Old West will enjoy Clavin's careful research and vivid writing." —Kirkus Reviews

"In “Tombstone: The Earp Brothers, Doc Holliday, and the Vendetta Ride from Hell,” [Clavin] does a yeoman’s job of combining original research with a knack for page-turning narrative that gives readers an exciting tour of the celebrated gunfight at the O.K. Corral." —Christian Science Monitor

"Commemorated in hundreds of books, songs, movies and television shows, the gunfight [at the OK Corral] has often been portrayed as the consummate battle between order and chaos, virtue and vice. But as Clavin reminds us in [his] recent book on the infamous clash, the men behind the badges were hardly exemplars of righteousness. Trot[s] along at a brisk pace." —Wall Street Journal

"Clavin...is steadfast in researching and describing the imperfections as well as the virtues of Earp’s character and pursues the most likely version of the event with the doggedness of Earp’s vengeance posse." —Lincoln Journal Star

This feature require that you enable JavaScript in your browser.
END_OF_DOCUMENT_TOKEN_TO_BE_REPLACED

END_OF_DOCUMENT_TOKEN_TO_BE_REPLACED

This feature require that you enable JavaScript in your browser.
END_OF_DOCUMENT_TOKEN_TO_BE_REPLACED