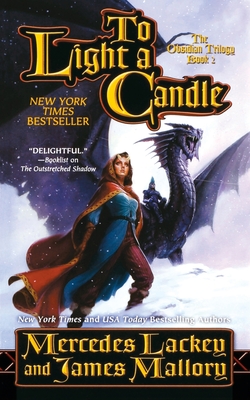 This is book number 2 in the The Obsidian Mountain Trilogy series.

In The Outstretched Shadow, which was named by VOYA as Best Science Fiction, Fantasy, and Horror book for 2003, Mercedes Lackey and James Mallory introduced readers to a complex new fantasy world populated by humans, centaurs, elves, talking unicorns, and demons. The Golden City of the Bells, where only humans live, is ruled by the Mage Council, practitioners of High Magic---a powerful magic that is stable and reliable, though rigidly controlled and performed only by men. Outside the City's walls, humans and magical beings mix freely and call upon Wild Magic---a system sometimes erratic, always driven by desire and need, and performed by both men and women.

Now, in To Light a Candle, the Demon Queen sends her forces against her human and elven enemies, sowing distraction and death. In the human City, the Queen's agents work to divide the Council and foment rebellion among the City's citizens. In the countryside, they target the most vulnerable and valuable---the young Elf Prince and the Wild Mages who might be the Demons' most dangerous enemies.

To his own surprise, young Kellen, once the disappointing son of the great Mage who leads the City's Mage Council, has become a powerful Knight-Mage. Valued for his bravery and his skills as both wizard and warrior, Kellen joins the Elves' war councils. Yet he cannot convince the City of his birth that it is in terrible danger.

Kellen's sister Idalia, a Wild Mage with great healing ability, has pledged her heart to Jermayan, a proud Elven warrior. Someday Idalia will pay a tragic Price for a world-saving work of Wild Magic, but until then, she will claim any joy life can offer her. Jermayan, who has learned much while fighting at Kellen's side and loving the human Idalia, finds that everything changes when he Bonds with a dragon while rescuing the Elf Prince and becomes the first Elven Mage in a thousand years.

Furious at her enemies' success with the dragon, the Demon Queen attacks in force. Light struggles against Dark, like flickering candleflames buried deep in the shadow of Obsidian f0 Mountain.

Mercedes Lackey is the author of the bestselling Valdemar series, the Obsidian Trilogy (The Outstretched Shadow, To Light a Candle, and When Darkness Falls), the Enduring Flame trilogy (The Phoenix Unchained, The Phoenix Engendered, and The Phoenix Transformed), and The Phoenix Tales of the Five Hundred Kingdoms. She has written many other books, including Trio of Sorcery, Phoenix and Ashes, Sacred Ground, The Firebird, The Fairy Godmother, and Alta. Lackey is the co-author, with Andre Norton, of the Halfblood Chronicles, including Elvenborn. Mercedes Lackey was born in Chicago and graduated from Purdue University. She has worked as an artist’s model, a computer programmer, and for American Airlines, and has written lyrics and recorded more than fifty songs. She lives in Oklahoma.

James Mallory is the author of the Merlin trilogy (Merlin: The Old Magic; Merlin: The King’s Wizard; Merlin: The End of Magic). He lives in upstate New York.

“In the captivating world conjured by veteran Lackey and classical scholar Mallory in this first of a high fantasy trilogy, there are three types of magic, each of which has its own rules, limits and variables. Kellen sets down a road he never expected to take, on a journey of dire importance to both humans and nonhumans (the latter including elves, unicorns, and other enchanting creatures). The narrative speeds to the end, avoiding a jarring halt while leaving the reader satisfied and wanting to know more.” —Publishers Weekly on The Outstretched Shadow

“Once Kellen realizes there is a world full of wonders, diversity, and people who think and live differently, he cannot return to the oppressive sameness of City life. When he refuses to give up the books, his father banishes him forever from the City and to a horrific death prearranged by the mages. The Wild Magic has another agenda for him, however, involving an acerbic unicorn and a woman-heavens!-to learn the Wild (but not sex) Magic from. Delightful.” —Booklist on The Outstretched Shadow

“Lackey and Mallory join forcers to create an epic fantasy filled with sorcery and swordplay set in a world on the verge of a Demon war. For most fantasy collections.” —Library Journal on The Outstretched Shadow

This feature require that you enable JavaScript in your browser.
END_OF_DOCUMENT_TOKEN_TO_BE_REPLACED

END_OF_DOCUMENT_TOKEN_TO_BE_REPLACED

This feature require that you enable JavaScript in your browser.
END_OF_DOCUMENT_TOKEN_TO_BE_REPLACED