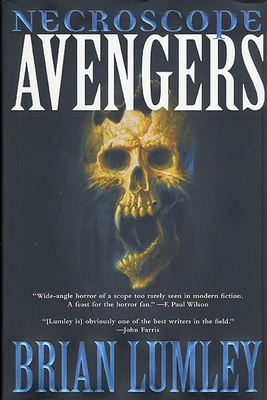 The packed cruise ship is a terrific nesting ground for a Lord and Lady of the Wamphyri on the run from E-Branch and the new Necroscope, Jake Cutter. By the time the ship is reported missing, the few beings still living on board will no longer be human . . . and the Wamphyri will be long fled to their next conquest.

Korath, the vampire who lurks in Jake Cutter's mind, is determined to gain control of Jake's life, and Jake is equally determined not to let him have it. But to win this struggle Jake must confide in Ben Trask-and Trask, the head of E-Branch, is likely to want Jake dead the minute he learns of Jake's intrusive passenger!

The spore garden planted under London by the third Wamphyri, Lord Swartz, is bearing bitter fruit indeed as a mysterious sleeping sickness-with a vampiric taint-slowly spreads among the population of Great Britain.

E-Branch action teams have more on their plates than they can handle. They must locate terrorists who threaten the world with nuclear homicide; permanently close the Gate between the Wamphyri world and Earth; analyze the spore plague; and locate and destroy the three Wamphyri.

Even the powers of Harry Keogh, the original Necroscope, summoned from the Great Beyond via the combined powers of E-Branch's strongest agents, may not be enough to defeat the monsters who have brought Earth to the brink of total destruction.

Brian Lumley is a Grand Master of Horror and a winner of the British Fantasy Award. His many novels, including Necroscope, have been published in more than thirteen countries around the world. He lives in England with his wife, Barbara Ann.

“A complicated but well-written story, sort of a vampire adventure for the Tom Clancy set. The plot is interesting and features plenty of political and military intrigue.” —Fangoria on NECROSCOPE: AVENGERS

“The amazingly prolific Lumley kicks off a new branch of his Necroscope series now that the original Necroscope (or vampire killer), Harry Keogh, is dead. The new novel stands alone. Necroscope fans will find themselves reading as fast as Lumley can type, and new readers may apply as well with this inaugural Jake Cutter entry.” —Kirkus Reviews on NECROSCOPE: INVADER

This feature require that you enable JavaScript in your browser.
END_OF_DOCUMENT_TOKEN_TO_BE_REPLACED

END_OF_DOCUMENT_TOKEN_TO_BE_REPLACED

This feature require that you enable JavaScript in your browser.
END_OF_DOCUMENT_TOKEN_TO_BE_REPLACED