Her Country: How the Women of Country Music Became the Success They Were Never Supposed to Be (Hardcover) 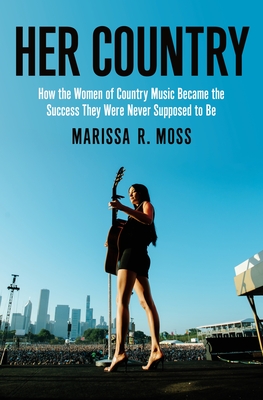 In country music, the men might dominate the radio waves. But it’s women—like Maren Morris, Mickey Guyton, and Kacey Musgraves—who are making history.

This is the full and unbridled story of the past twenty years of country music seen through the lens of these trailblazers’ careers—their paths to stardom and their battles against a deeply embedded boys’ club, as well as their efforts to transform the genre into a more inclusive place—as told by award-winning Nashville journalist Marissa R. Moss.

For the women of country music, 1999 was an entirely different universe—a brief blip in time, when women like Shania Twain and the Chicks topped every chart and made country music a woman’s world. But the industry, which prefers its stars to be neutral, be obedient, and never rock the boat, had other plans. It wanted its women to “shut up and sing”—or else.

In 2021, women are played on country radio as little as 10 percent of the time, but they’re still selling out arenas, as Kacey Musgraves does, and becoming infinitely bigger live draws than most of their male counterparts, creating massive pop crossover hits like Maren Morris’s “The Middle,” pushing the industry to confront its racial biases with Mickey Guyton’s “Black Like Me,” and winning heaps of Grammy nominations.

Her Country is the story of how in the past two decades, country’s women fought back against systems designed to keep them down and created entirely new pathways to success. It’s the behind-the-scenes story of how women like Kacey, Mickey, Maren, Miranda Lambert, Rissi Palmer, Brandi Carlile, and many more have reinvented their place in an industry stacked against them. When the rules stopped working for these women, they threw them out, made their own, and took control—changing the genre forever, and for the better.

An award-winning journalist, Marissa R. Moss has written about the topic of gender inequality on the country airwaves for outlets like Rolling Stone, NPR, Billboard, Entertainment Weekly, and many more. Moss was the 2018 recipient of the Rolling Stone Chet Flippo Award for Excellence in Country Music Journalism, and the 2019 Nashville Scene Best of Nashville Best Music Reporter. She has been a guest on The TODAY Show, Entertainment Tonight, CBS Morning Show, NPR’s Weekend Edition, WPLN, the Pop Literacy Podcast, and more.

“[Moss] examines the past two decades of country music through the distinct careers of Guyton, Musgraves and Morris — exploring how women, queer people and people of color have charted space for themselves in an industry that was never built for them.”
—The Washington Post

“Moss goes deep into the archives and shares the often tumultuous journey of countless women trying to pursue a music career in the male-dominated industry. Her Country is an eye-opening account of the gender bias…[and] Moss unpacks each singer’s story with precise detail and often harrowing accounts of sexism and racism.”
—Forbes

“Marissa R. Moss’s Her Country is a serious interrogation of the cultural meaning of contemporary gender and race in country music. It is sharp and fun (at times) and critical in exactly the way we need.”
—Tressie McMillan Cottom, author of Thick: And Other Essays

“Moss traces the history of Guyton’s, Musgraves’ and Maren Morris’ career against the larger dynamic that has defined women in country music…[This] is also a story of American politics, Moss argues. It shows how the battle for the soul of country music (and the dollar signs that come with it) mirrors a larger culture war in U.S. politics.”
—The 19th

“Her Country should be required reading for every music lover.”
—Sarah Arnold, director at Parnassus Books in Nashville, in Garden & Gun

“The book is deeply researched…[a] history of the kind of industry—and world—that the white men of country music have always hoped to maintain and the women who wouldn’t let them.”
—Pitchfork

“A highly-readable deep dive into the lives and careers of the women of country music…a celebration of the persistence and vision of these women and a call for change to the industry they’ve transcended…[Her Country] will be an inspiration to young musicians and a forewarning to anyone standing in their way.”
—Performer Magazine

“There’s a lot of joy sprinkled in the narrative…The stories of support and female friendship within this orbit of songwriters are enough to make a reader cry like Garth Brooks in his Netflix special…But maybe most importantly, Her Country doesn’t shy away from the nitty gritty about who gets left out of Music Row and why.”
—Chapter 16

“[Her Country is] an indictment of a music industry that has backed itself into a corner, and a celebration of artists who figured out their own shades and colors of the Nashville sound.”
—SouthBound, WFAE

“This is an important read for anyone who wants to understand the tenacity it takes to shove back against oppression, especially as an artist trying to break into a genre where you might not be immediately welcomed…Read this book if you’re looking to feel inspired by some excellent country artists who have refused to take ‘no’ for an answer.”
—Parton and Pearl

“Moss illustrates how these artists have carved out spaces for women, including women of color and LGBTQIA+ people, who are even less represented in the country music field. Moss’s clear and accessible writing is a delight, deftly capturing the lyricism of the genre…A must for anyone interested in country music and how the genre reflects on the United States as a whole.”
—Library Journal, *starred review*

“Moss’s stunningly crafted debut book…interlocks her subjects’ stories for a captivating structure, jumping between them to effectively create a cohesive narrative of feminist uprising in ‘the good ol’ boys club.’ This must read for music fans displays Moss’s extensive knowledge of Nashville’s Music Row scene…and she speaks of the genre’s ebbs and flows with an authoritative, assertive voice…Her Country speaks (sings, really) volumes about the rise of female artists in country music, and how far they still have to climb.”
—Booklist, *starred review*

“Part coming-of-age tale, part hard-hitting documentary of country music’s antagonistic history with women artists, this story is a page-turner even if you know how it turns out…The author’s reporting and storytelling shine as brightly as her subjects.”
—Kirkus Reviews, *starred review*

“Music journalist Moss debuts with an exuberant deep-dive into the careers of three country music stars who ‘opened up a window to a musical world where women are in charge.’ Offering a spirited cultural history of country music over the last 25 years, Moss traces how it…[became] a rigged system hell-bent on silencing its women…This is the unapologetic celebration fans have been waiting for.”
—Publishers Weekly

“Marissa Moss delivers a master class on the startling inequities in country music, introducing us to the modern-day pioneers, the rebels, the risk takers, the marginalized and the misfits. This is a story of the women who defied the odds and refused to kick the ladder. Her Country illuminates the path to those artists left behind, and reminds us why we all need our country heroes to look like us.”
—Brandi Carlile, Grammy-winning artist and New York Times bestselling author of Broken Horses

“I can’t think of a better person to be leading this much needed conversation than Marissa R. Moss. I'm thankful for how Her Country celebrates the power of women, our artistry, vision and perseverance in this industry.”
—LeAnn Rimes

“Country music has always been creative, full of strong folks, and is way more diverse than the often-portrayed stereotype. Marissa R. Moss’s Her Country is an excellent highlight of the incredible women who have paved the way for this genre as well as the women currently pushing it forward.”
—Orville Peck

“Her Country shines a light in the dark corners we don’t talk about; it’s equal parts unbelievable and completely believable. These realities are used brilliantly in this book as a tool to illustrate how women are breaking the mold, changing the rules, blurring the lines of genre, and how strong, resilient, inventive, and inclusive these women are.”
—Holly Laessig and Jess Wolfe of Lucius

“Her Country is a fascinating look at the weird isolationism of contemporary country.”
—Literary Hub

“[A] timely treatise on the infuriating gender politics of country music.”
—Holler

“Moss tells a story that not only impacts the Nashville music scene, but addresses the country music industry at large.”
—Nashville Lifestyles

This feature require that you enable JavaScript in your browser.
END_OF_DOCUMENT_TOKEN_TO_BE_REPLACED

END_OF_DOCUMENT_TOKEN_TO_BE_REPLACED

This feature require that you enable JavaScript in your browser.
END_OF_DOCUMENT_TOKEN_TO_BE_REPLACED