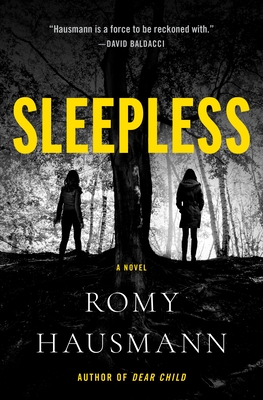 Dark secrets past and present collide in Sleepless, a haunting novel of guilt and retribution from Romy Hausmann, the international bestselling author of Dear Child.

It's been years since Nadja Kulka was convicted of a cruel crime. After being released from prison, she's wanted nothing more than to live a normal life: nice flat, steady job, even a few friends. But when one of those friends, Laura von Hoven--free-spirited beauty and wife of Nadja's boss--kills her lover and begs Nadja for her help, Nadja can't seem to refuse.

The two women make for a remote house in the woods, the perfect place to bury a body. But their plan quickly falls apart and Nadja finds herself outplayed, a pawn in a bizarre game in which she is both the perfect victim and the perfect murderer...

Romy Hausmann lives with her family at a remote house in the woods in Stuttgart, Germany. Dear Child is her English-language debut.

“Hausmann’s novel has the feel of a nightmare, unfolding at breakneck speed and exposing the terrifying vulnerability of a woman who wants nothing more than to be loved.”
—Sunday Times

But Hausmann’s dark new psychological thriller surpasses the earlier one in keeping the reader guessing…Hausmann manages to seamlessly tie all these threads and timelines together for a story that will keep the reader on the edge of their seat…By the end it will all make sense and you’ll be stunned. It’s seldom I recommend a book filled with mostly unlikeable characters, but if you like intelligently told, twisty tales, this one is for you.”
—Deadly Pleasures

“In present-day Germany, a woman burdened with the darkest of secrets from her brutal childhood becomes an unwitting participant in a fatal game of murder and deceit…Feverish, relentlessly tense…”
—Kirkus

This feature require that you enable JavaScript in your browser.
END_OF_DOCUMENT_TOKEN_TO_BE_REPLACED

END_OF_DOCUMENT_TOKEN_TO_BE_REPLACED

This feature require that you enable JavaScript in your browser.
END_OF_DOCUMENT_TOKEN_TO_BE_REPLACED