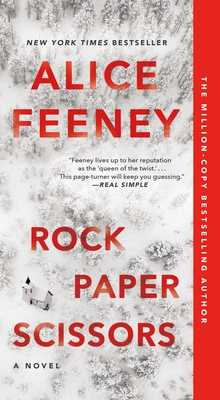 “Feeney lives up to her reputation as the “queen of the twist”…This page-turner will keep you guessing.” —Real Simple

Think you know the person you married? Think again…

Things have been wrong with Mr and Mrs Wright for a long time. When Adam and Amelia win a weekend away to Scotland, it might be just what their marriage needs. Self-confessed workaholic and screenwriter Adam Wright has lived with face blindness his whole life. He can’t recognize friends or family, or even his own wife.

Every anniversary the couple exchange traditional gifts--paper, cotton, pottery, tin--and each year Adam’s wife writes him a letter that she never lets him read. Until now. They both know this weekend will make or break their marriage, but they didn’t randomly win this trip. One of them is lying, and someone doesn’t want them to live happily ever after.

Rock Paper Scissors is the next exciting domestic thriller from the queen of the killer twist, New York Times bestselling author Alice Feeney.

ALICE FEENEY is the New York Times bestselling author of Sometimes I Lie, I Know Who You Are, His & Hers, and Rock Paper Scissors. Her novels have been translated into over twenty-five languages and have been optioned for major screen adaptations. Alice was a BBC journalist for fifteen years and now lives in the Devon countryside with her family. Daisy Darker is her fifth novel.

“Feeney lives up to her reputation as the “queen of the twist”…This page-turner will keep you guessing.”
—Real Simple

“Marriage has never been so disturbing…or so compelling. Alice Feeney has written a staggering novel filled with tension, suspense, and an ending that will leave you flabbergasted. You think you know where it’s going, but you have no idea.”
—Samantha Downing, bestselling author of My Lovely Wife

“Chilling and clever, with a twist so sharp you’ll get whiplash. Rock Paper Scissors is the kind of blistering, one-sit-read that Alice Feeney is just so incredibly good at.”
—Chris Whitaker, bestselling author of We Begin at the End

“I loved it!”
—Sarah Pinborough, bestselling author of Behind Her Eyes

“Entertaining and grippingly suspenseful on every page, this is a book not to be missed.”
—Deadly Pleasures

“Rock Paper Scissors is a perfectly-plotted thriller that hooked me from the opening scene. A really gripping story with clever switch-back twists that kept me off-balance (checking over my shoulder!) the whole nail-biting way. A scissor-sharp portrayal of a marriage on the rocks. Atmospheric, entertaining and clever.”
—Philippa East, author of Little White Lies

“This one’s already been optioned, but I’d encourage everyone to read it before it heads to the screen…The two dovetail towards an explosive conclusion that leaves us with just enough ambiguity to linger in the reader’s mind long after finishing.”
—CrimeReads

"This complicated gothic thriller of dueling spouses and homicidal writers is cleverly plotted and neatly tied up."
—Kirkus

“Sharp, cunning, and packed with shocks, Rock Paper Scissors gives new meaning to the word 'twisty.' A broken marriage, so many secrets, and a setting that will literally give you chills: just when you think you know what's going on, Alice Feeney sets off a new shockwave.”
—Laurie Elizabeth Flynn, author of The Girls Are All So Nice Here

This feature require that you enable JavaScript in your browser.
END_OF_DOCUMENT_TOKEN_TO_BE_REPLACED

END_OF_DOCUMENT_TOKEN_TO_BE_REPLACED

This feature require that you enable JavaScript in your browser.
END_OF_DOCUMENT_TOKEN_TO_BE_REPLACED