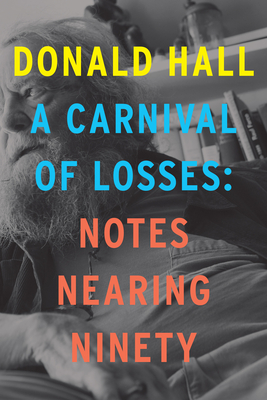 “Hall lived long enough to leave behind two final books, memento mori titled ‘Essays After Eighty’ (2014) and now ‘A Carnival of Losses: Notes Nearing Ninety.’ They’re up there with the best things he did.” —Dwight Garner, New York Times

From the former poet laureate of the United States, essays from the vantage point of very old age

Donald Hall lived a remarkable life of letters, one capped most recently by the New York Times bestseller Essays After Eighty, a “treasure” of a book in which he “balance[s] frankness about losses with humor and gratitude” (Washington Post). Before his passing in 2018, nearing ninety, Hall delivered this new collection of self-knowing, fierce, and funny essays on aging, the pleasures of solitude, and the sometimes astonishing freedoms arising from both. He intersperses memories of exuberant days—as in Paris, 1951, with a French girl memorably inclined to say, “I couldn’t care less”—with writing, visceral and hilarious, on what he has called the “unknown, unanticipated galaxy” of extreme old age.

“Why should a nonagenarian hold anything back?” Hall answers his own question by revealing several vivid instances of “the worst thing I ever did," and through equally uncensored tales of  literary friendships spanning decades, with James Wright, Richard Wilbur, Seamus Heaney, and other luminaries.

Cementing his place alongside Roger Angell and Joan Didion as a generous and profound chronicler of loss, Hall returns to the death of his beloved wife, Jane Kenyon, in an essay as original and searing as anything he's written in his extraordinary literary lifetime.

DONALD HALL (1928-2018) served as poet laureate of the United States from 2006 to 2007. He was a member of the American Academy of Arts and Letters and a recipient of the National Medal of the Arts, awarded by the president.

“Hall lived long enough to leave behind two final books, memento mori titled ‘Essays After Eighty’ (2014) and now ‘A Carnival of Losses: Notes Nearing Ninety.’ They’re up there with the best things he did.” —Dwight Garner, New York Times   “Donald Hall writes about love and loss and art and home in a manner so essential and direct it’s as if he’s put the full force of his life on the page. There are very few perfect books and A Carnival of Losses is one of them.”—Ann Patchett   “A freewheeling essay collection that’s a fitting coda to a distinguished career . . . Hall may have reached his roundhouse but not before bequeathing readers with this moving valedictory gift.” —Washington Post   “It's a beauty, brimming with stories, confessions and faded snapshots in time in which he muses about life, settles a few scores and brags a little about his accomplishments . . . It’s odd that a book whose subject is loss could be so uplifting. And yet it is. Hall may be telling us what it’s like to fall apart, but he does it so calmly, and with such wit and exactitude, that you can’t help but shake your head in wonder.” —Ann Levin, Associated Press   “A joy to read.” —BookPage   “It’s a heartbreaking beauty of a book.” —Bookish   “Hall’s ruminative and detailed reflections on life make this a fantastic follow-up to his Essays After Eighty.” —Publishers Weekly, starred review   “A joyful, wistful celebration of poetry, poets, and a poet’s life . . . There’s much to enjoy in these exuberant 'notes.'” —Kirkus Reviews —

This feature require that you enable JavaScript in your browser.
END_OF_DOCUMENT_TOKEN_TO_BE_REPLACED

END_OF_DOCUMENT_TOKEN_TO_BE_REPLACED

This feature require that you enable JavaScript in your browser.
END_OF_DOCUMENT_TOKEN_TO_BE_REPLACED