The Naming of the Shrew: A Curious History of Latin Names (Hardcover) 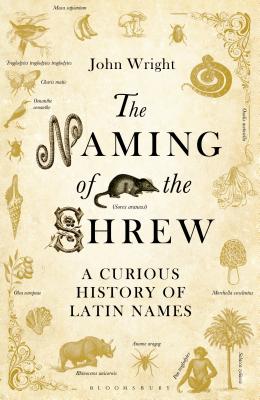 Latin names--frequently unpronounceable, all too often wrong and always a tiny puzzle to unravel--have been annoying the layman since they first became formalized as scientific terms in the eighteenth century.

Why on earth has the entirely land-loving Eastern Mole been named Scalopus aquaticus, or the Oxford Ragwort been called Senecio squalidus--'dirty old man'? What were naturalists thinking when they called a beetle Agra katewinsletae, a genus of fish Batman, and a Trilobite Han solo? Why is zoology replete with names such as Chloris chloris chloris (the greenfinch), and Gorilla gorilla gorilla (a species of, well gorilla)?

The Naming of the Shrew will unveil these mysteries, exploring the history, celebrating their poetic nature and revealing how naturalists sometimes get things so terribly wrong. With wonderfully witty style and captivating narrative, this book will make you see Latin names in a whole new light.

John Wright is a passionate natural historian and the author of the River Cottage Handbooks Mushrooms, Edible Seashore, Hedgerow and Booze. As well as writing for national publications, he often appears on the River Cottage series for Channel 4. He gives lectures on natural history and every year he takes around fifty 'forays' showing people how to collect food--plants from the hedgerow, seaweeds and shellfish from the shore and mushrooms from pasture and wood. Over a period of twenty years he has taken around five hundred such forays. Fungi are his greatest passion and he has thirty-five years of experience in studying them. Wright is a member of the British Mycological Society and a Fellow of the Linnaean Society. He lives in rural West Dorset with his wife and two teenage daughters.

"Who would have thought that a book about Latin names could be quite so compelling!!" —Alan Titchmarsh

"I have not fully recovered from the discovery that the proper Latin name of the western lowland gorilla is Gorilla gorilla gorilla." —Independent on Sunday

"The pleasure of Wright’s book is the contrast between the rigour required for giving names and the careless minds and mischievous humour of those who devise them." —The Times

"Erudite but whimsical . . . a book as charming as it is wise." —Irish Examiner

"A great read." —Grow Your Own

This feature require that you enable JavaScript in your browser.
END_OF_DOCUMENT_TOKEN_TO_BE_REPLACED

END_OF_DOCUMENT_TOKEN_TO_BE_REPLACED

This feature require that you enable JavaScript in your browser.
END_OF_DOCUMENT_TOKEN_TO_BE_REPLACED