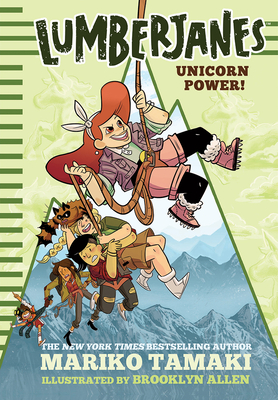 This is book number 1 in the Lumberjanes series.

Mariko Tamaki is a writer known for her graphic novel This One Summer, a Caldecott Honor Book and Printz Award winner, cocreated by her cousin Jillian Tamaki, among other notable works. Visit her at marikotamaki.blogspot.com. She lives in Oakland, California.

Brooklyn Allen is a cocreator and the original illustrator of the Lumberjanes series and a graduate of the Savannah College of Art and Design. He lives in Richmond, Virginia, and can be found online at brooklynaallen.tumblr.com.

**STARRED REVIEW**
"Without missing a beat, this novelization has successfully sustained the fun, feminist feel and lively vernacular of the beloved graphic-novel series, a notable feat...With its just-right blend of giggleworthy jokes, LGBTQ-positive characters, and affirmative emphasis on friendship, this middle-grade charmer can make even the coldest, bleakest day feel like a sunny day at summer camp."
— Kirkus

“…the series emphasizes the same values of inclusion, friendship, and teamwork that infuse the Lumberjanes comics.”

"Fans familiar with the comic series will find all five of the girls fully presented here . . . readers of the series will still want to accompany the girls on another adventure, and newbies to the quintet’s hijinks may find this an appealing invitation to the comics."
— Bulletin of the Center for Children's Books

"Full of puns, adventure, magical creatures, and girl power aplenty, this novel offers middle-grade readers a new way to enjoy Lumberjanes . . . Tamaki expertly captures the tone of the series, in both its manic plots and its narrative style, and she adds in some meaningful backstory and conflict."
— Booklist

"Mariko Tamaki's novelization brings the Lumberjanes from comic books to fiction in Lumberjanes: Unicorn Power! Enhanced with fantastic illustrations by Brooke Allen, one of the creators of the Lumberjanes comics, Unicorn Power is a hilarious and thoughtfully modern take on the classic summer camp adventure that is destined to delight."
— Shelf Awareness