Strangers at the Feast: A Novel (Paperback) 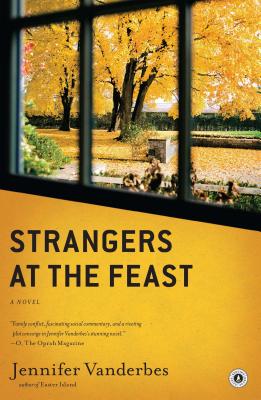 “Oh, how family holidays can go wrong -- terribly wrong. Thanksgiving for the Olsons begins on a hopeful note, yet the reader feels a clear sense of impending doom. Anyone will be able to relate to the family dynamics of this classic American family in this familiar, yet disturbing novel. Vanderbes nails every character and each voice perfectly.”
— Valerie Koehler, Blue Willow Bookshop, Houston, TX

On Thanksgiving Day 2007, as the country teeters on the brink of a recession, three generations of the Olson family gather. Eleanor and Gavin worry about their daughter, a single academic, and her newly adopted Indian child, and about their son, who has been caught in the imploding real-estate bubble. While the Olsons navigate the tensions and secrets that mark their relationships, seventeen-year-old Kijo Jackson and his best friend Spider set out from the nearby housing projects on a mysterious job. A series of tragic events bring these two worlds ever closer, exposing the dangerously thin line between suburban privilege and urban poverty, and culminating in a crime that will change everyone’s life.

In her gripping new book, Jennifer Vanderbes masterfully lays bare the fraught lives of this complex cast of characters and the lengths to which they will go to protect their families. Strangers at the Feast is at once a heartbreaking portrait of a family struggling to find happiness and an exploration of the hidden costs of the American dream.

Published to international acclaim, Jennifer Vanderbes’s first book, Easter Island, was hailed as “one of those rare novels that appeals equally to heart, mind, and soul,” by the San Francisco Chronicle. In her second novel, this powerful writer reaches new heights of storytelling. This page-turner wrestles with the most important issues of our time—race, class, and above all else, family. Strangers at the Feast will leave readers haunted and deeply affected.

Jennifer Vanderbes is the author of the novels The Secret of Raven Point, Easter Island, and Strangers at the Feast, and is the recipient of numerous awards, including a Guggenheim Fellowship and a New York Public Library Cullman Fellowship. Her writing has appeared in The New York Times, The Wall Street Journal, The Washington Post, and Granta and has been translated into sixteen languages. She lives in New York City. Visit her website at JenniferVanderbes.com.

"Family conflict, fascinating social commentary, and a riveting plot converge in Jennifer Vanderbes' stunning Strangers at the Feast, a thriller that also raises large and haunting questions about the meaning of guilt, innocence, and justice."
— The Oprah Magazine

"Vanderbes has written an absorbing and suspenseful story about the dynamics of family, generational misunderstandings, and the desperate ways one copes with both the arbitrariness of fate and the consequences of one's choices. "
— Library Journal, starred review

“Gorgeously written and uncompromising in its vision, Strangers at the Feast is more than a great novel. It's an important one.”
— Justin Cronin

“Jennifer Vanderbes does that rare thing in a novel: she stands back and lets her characters talk. Strangers at the Feast is filled with smart conversation, as well as humor, depth, sorrow and surprise. This is a big and satisfying book.”
— Meg Wolitzer

“Compelling. It's punctuated with sharp observations about class and race, about the winners and losers in America's power grabs, and about the ways a family can play out a culture's conflicts.”
— Washington Post

“Vanderbes has gracefully accomplished the difficult narrative feat of creating a family, which, while emblematic of shifts in the American way of life, is composed of completely realized individuals.”
— Boston Globe

This feature require that you enable JavaScript in your browser.
END_OF_DOCUMENT_TOKEN_TO_BE_REPLACED

END_OF_DOCUMENT_TOKEN_TO_BE_REPLACED

This feature require that you enable JavaScript in your browser.
END_OF_DOCUMENT_TOKEN_TO_BE_REPLACED