A Sudden Light: A Novel (Paperback) 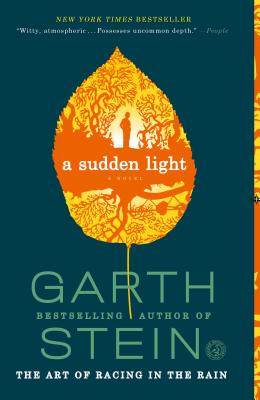 Riddell House sits on a large estate overlooking the Puget Sound. But this is no normal house. It's a mansion completely built out of full grown, giant trees. By spending the summer there with his father, 14 year old Trevor is determined to send his grandfather to a home, sell the land, and bring his recently separated parents back together. However, he soon discovers that the house is not only home to his grandfather and aunt, but to many secrets and a ghost with it’s own story. Haunting and beautifully written, Garth Stein has delivered another wonderfully, captivating narrative and it was very difficult to put down!

“Stein's new novel of family relationships and responsibilities explores the connections between the living and the dead, between parents and children, and what it means to be stewards of the land. Two very compelling characters drive the story: a 14-year-old boy trying to patch his family back together and a centuries-old ghost trying to make sure that the wrongs of the past are put right so that a family's legacy can be maintained. A Sudden Light is a compelling search for faith and meaning in a world where bad things sometimes happen.”
— Andrea Jones, The Galaxy Bookshop, Hardwick, VT

From Garth Stein, author of the beloved bestseller The Art of Racing in the Rain—now a major motion picture!

The New York Times bestselling “witty, atmospheric” (People) story of a once powerful American family, and the price that must be paid by the heirs as they struggle for redemption: “A captivating page-turner” (Star Tribune, Minneapolis).

Twenty-three years after the fateful summer of 1990, Trevor Riddell recalls the events surrounding his fourteenth birthday, when he gets his first glimpse of the infamous Riddell House. Built from the spoils of a massive timber fortune, the legendary family mansion is constructed of giant whole trees and is set on a huge estate overlooking Seattle’s Puget Sound. Trevor’s bankrupt parents have separated, and his father, Jones Riddell, has brought Trevor to Riddell House with a goal: to join forces with Aunt Serena, dispatch the ailing and elderly Grandpa Samuel to a nursing home, sell off the house and property for development, and divide up the profits.

But as young Trevor explores the house’s hidden stairways and forgotten rooms, he discovers secrets that convince him that the family plan may be at odds with the land’s true destiny. Only Trevor’s willingness to face the dark past of his forefathers will reveal the key to his family’s future.

Spellbinding and atmospheric, A Sudden Light is rich with vivid characters, poetic scenes of natural beauty, and powerful moments of spiritual transcendence. “Garth Stein is resourceful, cleverly piecing together the family history with dreams, overheard conversations, and reminiscences…a tale well told,” (The Seattle Times)—a triumphant work of a master storyteller at the height of his power.

Garth Stein is the author of the New York Times bestselling novels, A Sudden Light and The Art of Racing in the Rain, and two previous novels, How Evan Broke His Head and Other Secrets and Raven Stole the Moon. He is the cofounder of Seattle7Writers, a nonprofit collective of Northwest authors working to foster a passion for the written word. He lives in Seattle with his family. Visit him online at GarthStein.com.

"Remarkable....Stein's prose is assured, gorgeous, and magnificently atmospheric....Cheers to Garth Stein for showing us compassion, empathy, and incredible talent."
— The Dallas Morning News

“Wow! I devoured A Sudden Light, a grand, gorgeous, multi-generational epic of the Pacific Northwest. Garth Stein has given us another singular, soulful, and wise narrator for the ages, who tells us a story full of mystery and yearning. I adored this book.”
— Maria Semple, New York Times bestselling author of Where’d You Go, Bernadette

“A Sudden Light is the best of many genres: a ghost story, a love story, historical fiction….a truly killer read…a bold, poignant book about wealth, family ties, and the power—and fallacy—of memory.”
— BookPage