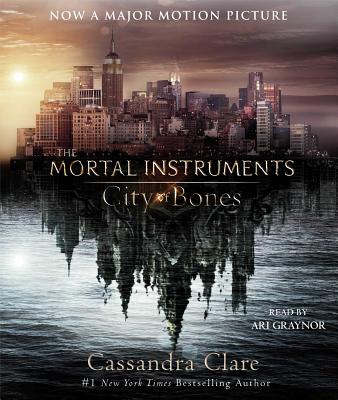 Discover the world of the Shadowhunters in the first installment of the internationally bestselling Mortal Instruments series and “prepare to be hooked” (Entertainment Weekly). City of Bones is a Shadowhunters novel.

When Clary Fray heads out to the Pandemonium Club in New York City, she hardly expects to witness a murder—much less a murder committed by three people covered with strange tattoos and brandishing bizarre weapons. And she’s more than a little startled when the body disappears into thin air. Soon Clary is introduced to the world of the Shadowhunters, a secret cadre of warriors dedicated to driving demons out of our world and back to their own. And Clary is introduced with a vengeance, when her mother disappears and Clary herself is almost killed by a grotesque monster. How could a mere human survive such an attack and kill a demon? The Shadowhunters would like to know…

Cassandra Clare is the author of the #1 New York Times, USA TODAY, Wall Street Journal, and Publishers Weekly bestselling Shadowhunter Chronicles. She is also the coauthor of the bestselling fantasy series Magisterium with Holly Black. The Shadowhunter Chronicles have been adapted as both a major motion picture and a television series. Her books have more than fifty million copies in print worldwide and have been translated into more than thirty-five languages. Cassandra lives in western Massachusetts with her husband and three fearsome cats. Visit her at CassandraClare.com. Learn more about the world of the Shadowhunters at Shadowhunters.com.

Ari Graynor starred in Showtime’s I’m Dying Up Here, as well as the films The Front Runner and The Disaster Artist. Other film credits include For a Good Time Call, Nick & Norah’s Infinite Playlist, and The Sitter, among others. Extensive theater work includes Brooklyn Boy, The Little Dog Laughed, and Yen, for which she received a Lucille Lortel nomination.

This feature require that you enable JavaScript in your browser.
END_OF_DOCUMENT_TOKEN_TO_BE_REPLACED

END_OF_DOCUMENT_TOKEN_TO_BE_REPLACED

This feature require that you enable JavaScript in your browser.
END_OF_DOCUMENT_TOKEN_TO_BE_REPLACED