Seven Days in Hell: Canada's Battle for Normandy and the Rise of the Black Watch Snipers (Hardcover) 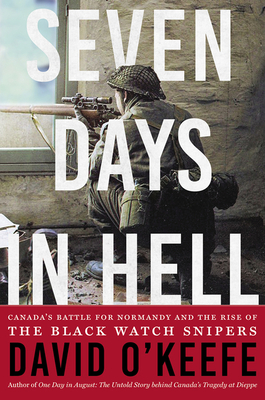 Centred around one of Canada’s most storied regiments, Seven Days in Hell tells the epic tale of the bloody battle for Verrières Ridge, a dramatic saga that unfolded just weeks after one of Canada’s greatest military triumphs of the Second World War. O’Keefe takes us on a heart-pounding journey at the sharp end of combat during the infamous Normandy campaign, when more than 300 Black Watch Highlanders from across Canada, the United States, Great Britain and the Allied world found themselves embroiled in mortal combat against elite Waffen-SS units and grizzled Eastern Front veterans. Only a handful walked away. Pinned down as the result of strategic blunders and the fog of war, the men were thrust into a nightmare where station, rank, race and religion mattered little and only character won the day. Drawing on formerly classified documents and rare first-person testimony from the men who fought on the front lines, O’Keefe follows the footsteps of the ghosts of Normandy, giving a voice yet again to the men who sacrificed everything in the summer of 1944.

DAVID O’KEEFE is an award-winning historian, documentarian and professor at Marianopolis College in Westmount, Quebec. He served with the Black Watch (Royal Highland Regiment) of Canada in the Canadian Forces in Montreal and worked as a signals intelligence research historian for the Directorate of History and Heritage. He created and collaborated on more than fifteen documentaries for the History channel and National Geographic and has appeared on CBC, CTV, Global Television and the UKTV Network in Great Britain. He wrote and co-produced the groundbreaking documentary Dieppe Uncovered, which made headlines around the world, as well as the documentary Black Watch Snipers. He is also the writer, co-creator and host of the History channel’s program War Junk. In addition, he is the bestselling author of One Day in August: The Untold Story behind Canada’s Tragedy at Dieppe, a finalist for the John W. Dafoe Book Prize, the CAA Lela Common Award for Canadian History and the RBC Taylor Prize. David O’Keefe lives in Rigaud, Quebec, with his wife and children.

“If Canadians should know how their ancestors proved victorious in France on D-Day in the Second World War, so they must understand how they endured setbacks in the larger Normandy campaign. Such is the object of Seven Days in Hell. And nobody illustrates this truth better than military historian David O’Keefe.”
— Ted Barris, author of Rush to Danger and Dam Busters

“Seven Days in Hell reads like a novel. David O’Keefe has taken the Black Watch’s decimation at Verrières Ridge in July 1944 and created an imaginative work about it which also informs and teaches us about this Canadian tragedy. Drawing upon decades of detailed primary and secondary research, he describes the over-all context of the Normandy campaign and sets the stage for a page-turning and gruesome story of those seven days in hell.”
— Isabel Campbell, Senior Historian, Directorate of History and Heritage of the Department of National Defence

“An impressive book that tells an extraordinary tale. David O’Keefe, a talented storyteller, has crafted an immensely detailed account. From the heroics of the regimental snipers and the tragedy of the acting battalion commander to the questionable decisions made by senior commanders, O’Keefe sheds new light on the Battle of Verrières Ridge.”
— Mike Bechthold, Head of the Juno Beach Centre, author of Flying to Victory: Raymond Collishaw and the Western Desert Campaign, 1940–1941

“A fascinating and candid portrait of the brutal realities for a battalion operating within the ruthless logic required to achieve Allied victory in Normandy.”
— Stephen Prince, Head, Naval Historical Branch, Royal Navy and Deputy Head of the Naval Staff, Ministry of Defence, United Kingdom

This feature require that you enable JavaScript in your browser.
END_OF_DOCUMENT_TOKEN_TO_BE_REPLACED

END_OF_DOCUMENT_TOKEN_TO_BE_REPLACED

This feature require that you enable JavaScript in your browser.
END_OF_DOCUMENT_TOKEN_TO_BE_REPLACED