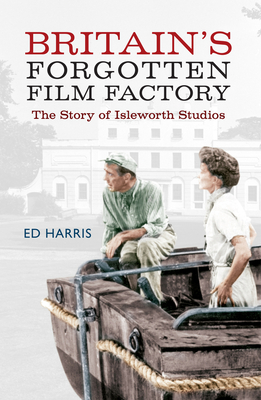 The story of Isleworth Studios is essentially that of the British film industry from 1914 to 1952. Beginning with the first British Sherlock Holmes screen adaptation and ending with its Oscar-winning swansong, The African Queen, in the intervening years it was one of the most technically advanced studios in the country and home to some of the best and the worst examples of British cinema.It experienced the transition from silent films to talkies. Britain’s only movie mogul, Alexander Korda, arrived, looking to rival Hollywood, followed by Douglas Fairbanks Jr looking to rival Korda. Buster Keaton struggled with alcoholism; Richard Burton made his screen debut; Bogart, Hepburn and Huston made a classic; and Emeric Pressburger directed his first and only film at Isleworth. Little by little the old dream factory’s physical shape is now crumbling or altered, or is disappearing altogether. Soon it may be gone.Isleworth Studios has a history worthy of more than just an addendum in the annals of the British film industry. This is its story told for the very first time.

Ed Harris began his career in the broadcast and entertainment industry in 1969 as a film researcher on Granada Television’s Cinema and finished it in 2000 as a BBC ‘suit’. After taking an MA in Local Studies at Kingston University in 2001 he became an Honorary Research Fellow and is now a full-time writer and researcher. He lives near Isleworth in Whitton, Twickenham.

This feature require that you enable JavaScript in your browser.
END_OF_DOCUMENT_TOKEN_TO_BE_REPLACED

END_OF_DOCUMENT_TOKEN_TO_BE_REPLACED

This feature require that you enable JavaScript in your browser.
END_OF_DOCUMENT_TOKEN_TO_BE_REPLACED