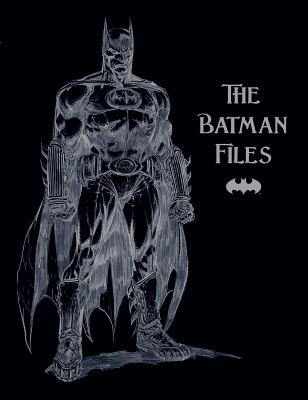 By Matthew Manning
Email or call for price
Out of Print

Discovered in the Batcave, The Batman Files is Bruce Wayne’s secret journal, containing all the intricate information needed to carry on his mission, just in case …Batman is a cultural, super-hero icon. First introduced in 1939, the alter ego of Bruce Wayne has been known through countless DC comics, a TV series, and mega hit movies.

Unearthed from the depths of the Batcave by Mathew K. Manning, The Batman Files begins with Wayne's childhood drawings and continues along a time line of significant events in Batman's life. Complete and authentic in every way possible, all of Batman's friends and foes--from Poison Ivy, Catwoman, the Riddler, and Penguin, to the Joker, Batgirl, Mr. Freeze, and of course, Robin--appear throughout the dossier to provide a framework of the Caped Crusader's entire career.

Completely outlining Batman's war on crime, The Batman Files includes in-depth computer files, news articles, crime scene photos, blueprints, schematics, and actual maps of Gotham City that were collected, and in many cases even drawn, by the Caped Crusader himself.

High production values include black matte gilding, as well as a high-tech fabric cover--complete with a metallic Batman emblem to secure the secret contents within. Each detail of Batman's life is carefully and faithfully detailed with the involvement of DC Comics inside The Batman Files--destined to be the must-have gift for every avid Batman fan and collector.

Matthew K. Manning is a comic book writer, historian, and fan. Over the course of his career, he's written comics or books starring Batman, Superman, the Justice League, and even Bugs Bunny. Some of his more recent works include AMP's The Superman Files. He lives in Asheville, North Carolina, with his wife, Dorothy, and his daughters, Lillian and Gwendolyn.

“It will make any comic book enthusiast in your home, little or otherwise, positively batty.” (People magazine)

“This is the ultimate gift item for the inveterate Batman fan.” (Martin Brady, BookPage)

“The truly spectacular Batman Files coffee-table giant qualifies as the ultimate treasure trove of this incomparable superhero.” (The Denver Post)

“…the book contains a lot of fun little bits that hardcore Bat-fanatics should get a kick out of..." (Joey Esposito, IGN.com)

"...destined to be the must-have gift for every avid Batman fan and collector.” (Malcom Reynolds, ComicBookMovie.com)

"The author has put a great amount of detail making each piece that hasn't appeared anywhere else feel true to the comics." (Intruder, ComicBookMovie.com)

"'The Batman Files' makes an incredible gift for the serious fan of the Caped Crusader." (Joseph Szadkowski, Washington Times)

This feature require that you enable JavaScript in your browser.
END_OF_DOCUMENT_TOKEN_TO_BE_REPLACED

END_OF_DOCUMENT_TOKEN_TO_BE_REPLACED

This feature require that you enable JavaScript in your browser.
END_OF_DOCUMENT_TOKEN_TO_BE_REPLACED