A Primate's Memoir: A Neuroscientist&#65533;s Unconventional Life Among the Baboons (Compact Disc) 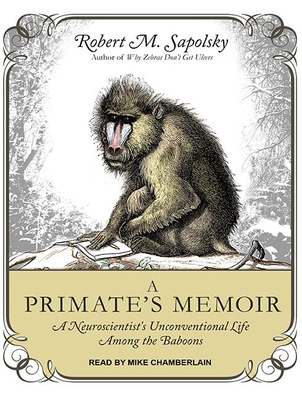 By Robert M. Sapolsky, Mike Chamberlain (Narrated by)
$44.99
Email or call for price.

I had never planned to become a savanna baboon when I grew up; instead, I had always assumed I would become a mountain gorilla, writes Robert Sapolsky in this witty and riveting chronicle of a scientist's coming-of-age in remote Africa. An exhilarating account of Sapolsky's twenty-one-year study of a troop of rambunctious baboons in Kenya, A Primate's Memoir interweaves serious scientific observations with wry commentary about the challenges and pleasures of living in the wilds of the Serengeti-for man and beast alike. Over two decades, Sapolsky survives culinary atrocities, gunpoint encounters, and a surreal kidnapping, while witnessing the encroachment of the tourist mentality on the farthest vestiges of unspoiled Africa. As he conducts unprecedented physiological research on wild primates, he becomes evermore enamored of his subjects-unique and compelling characters in their own right-and he returns to them summer after summer, until tragedy finally prevents him. By turns hilarious and poignant, A Primate's Memoir is a magnum opus from one of our foremost science writers.

Robert M. Sapolsky is the author of books including "A Primate's Memoir" and "The Trouble with Testosterone," which was a "Los Angeles Times" Book Award finalist.

Mike Chamberlain is an actor and voice-over performer, as well as an "AudioFile" Earphones Award-winning audiobook narrator. Along with animation and video game characters, Mike performs narration and voices promos for television.

This feature require that you enable JavaScript in your browser.
END_OF_DOCUMENT_TOKEN_TO_BE_REPLACED

END_OF_DOCUMENT_TOKEN_TO_BE_REPLACED

This feature require that you enable JavaScript in your browser.
END_OF_DOCUMENT_TOKEN_TO_BE_REPLACED