The Singularity Is Near: When Humans Transcend Biology (Compact Disc) 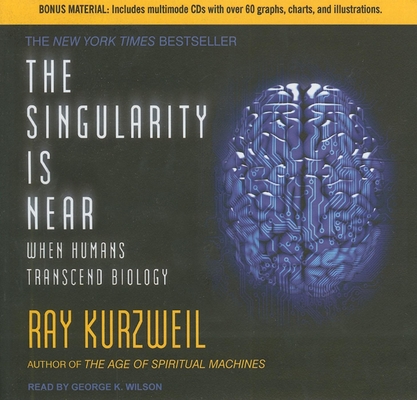 For over three decades, the great inventor and futurist Ray Kurzweil has been one of the most respected and provocative advocates of the role of technology in our future. In his classic The Age of Spiritual Machines, he argued that computers would soon rival the full range of human intelligence at its best. Now he examines the next step in this inexorable evolutionary process: the union of human and machine, in which the knowledge and skills embedded in our brains will be combined with the vastly greater capacity, speed, and knowledge-sharing ability of our creations. That merging is the essence of the Singularity, an era in which our intelligence will become increasingly nonbiological and trillions of times more powerful than it is today-the dawning of a new civilization that will enable us to transcend our biological limitations and amplify our creativity. In this new world, there will be no clear distinction between human and machine, real reality and virtual reality. While the social and philosophical ramifications of these changes will be profound, and the threats they pose considerable, The Singularity Is Near maintains a radically optimistic view of the future course of human development. As such, it offers a view of the coming age that is both a dramatic culmination of centuries of technological ingenuity and a genuinely inspiring vision of our ultimate destiny.

Ray Kurzweil is one of the world's leading inventors and the author of books including "The Age of Intelligent Machines" and "The Singularity Is Near."

This feature require that you enable JavaScript in your browser.
END_OF_DOCUMENT_TOKEN_TO_BE_REPLACED

END_OF_DOCUMENT_TOKEN_TO_BE_REPLACED

This feature require that you enable JavaScript in your browser.
END_OF_DOCUMENT_TOKEN_TO_BE_REPLACED