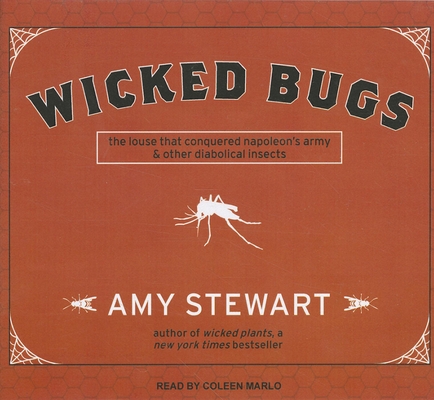 By Amy Stewart, Coleen Marlo (Narrated by)
$59.99
Email or call for price.

In this darkly comical look at the sinister side of our relationship with the natural world, Stewart has tracked down over one hundred of our worst entomological foes-creatures that infest, infect, and generally wreak havoc on human affairs. From the world's most painful hornet, to the flies that transmit deadly diseases, to millipedes that stop traffic, to the Japanese beetles munching on your roses, Wicked Bugs delves into the extraordinary powers of many-legged creatures. With wit, style, and exacting research, Stewart has uncovered the most terrifying and titillating stories of bugs gone wild. It's an A to Z of insect enemies, interspersed with sections that explore bugs with kinky sex lives, creatures lurking in the cupboard, militant ants, and phobias that feed our (sometimes) irrational responses to bugs. Wicked Bugs is a fascinating mixture of history, science, murder, and intrigue that begins-but doesn't end-in your own backyard.

Amy Stewart is the bestselling author of several books on the perils and pleasures of the natural world, including "From the Ground Up," "The Earth Moved," "Flower Confidential," "Wicked Plants," and "Wicked Bugs."

"AudioFile" Earphones Award winner Coleen Marlo has been nominated three times for an Audie Award, winning for "Snakewoman of Little Egypt" by Robert Hellenga. She has also been awarded three Listen-Up Awards from "Publishers Weekly," and "Publishers Weekly" named Coleen Audiobook Reader of the Year for 2010.

"Stewart amusingly but analytically profiles the baddest bugs around in quick but attention-grabbing snapshots of little creatures that pack a lot of punch." ---Booklist

This feature require that you enable JavaScript in your browser.
END_OF_DOCUMENT_TOKEN_TO_BE_REPLACED

END_OF_DOCUMENT_TOKEN_TO_BE_REPLACED

This feature require that you enable JavaScript in your browser.
END_OF_DOCUMENT_TOKEN_TO_BE_REPLACED