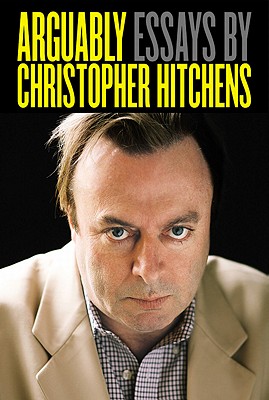 By Christopher Hitchens
$30.00
Email or call for price.

"All first-rate criticism first defines what we are confronting," the late, great jazz critic Whitney Balliett once wrote. By that measure, the essays of Christopher Hitchens are in the first tier. For nearly four decades, Hitchens has been telling us, in pitch-perfect prose, what we confront when we grapple with first principles-the principles of reason and tolerance and skepticism that define and inform the foundations of our civilization-principles that, to endure, must be defended anew by every generation.

"A short list of the greatest living conversationalists in English," said The Economist, "would probably have to include Christopher Hitchens, Sir Patrick Leigh-Fermor, and Sir Tom Stoppard. Great brilliance, fantastic powers of recall, and quick wit are clearly valuable in sustaining conversation at these cosmic levels. Charm may be helpful, too." Hitchens-who staunchly declines all offers of knighthood-hereby invites you to take a seat at a democratic conversation, to be engaged, and to be reasoned with. His knowledge is formidable, an encyclopedic treasure, and yet one has the feeling, reading him, of hearing a person thinking out loud, following the inexorable logic of his thought, wherever it might lead, unafraid to expose fraudulence, denounce injustice, and excoriate hypocrisy. Legions of readers, admirers and detractors alike, have learned to read Hitchens with something approaching awe at his felicity of language, the oxygen in every sentence, the enviable wit and his readiness, even eagerness, to fight a foe or mount the ramparts.

Here, he supplies fresh perceptions of such figures as varied as Charles Dickens, Karl Marx, Rebecca West, George Orwell, J.G. Ballard, and Philip Larkin are matched in brilliance by his pungent discussions and intrepid observations, gathered from a lifetime of traveling and reporting from such destinations as Iran, China, and Pakistan.

Hitchens's directness, elegance, lightly carried erudition, critical and psychological insight, humor, and sympathy-applied as they are here to a dazzling variety of subjects-all set a standard for the essayist that has rarely been matched in our time. What emerges from this indispensable volume is an intellectual self-portrait of a writer with an exemplary steadiness of purpose and a love affair with the delights and seductions of the English language, a man anchored in a profound and humane vision of the human longing for reason and justice.

Christopher Hitchens was a contributing editor to Vanity Fair,Slate, and the Atlantic, and the author of numerous books, including works on Thomas Jefferson, Thomas Paine, and George Orwell. He also wrote the international bestsellers god Is Not Great: How Religion Poisons Everything, Hitch-22: A Memoir, and Arguably. He died in December 2011.

"Anyone who occasionally opens one of our more serious periodicals has learned that the byline of Christopher Hitchens is an opportunity to be delighted or maddened-possibly both-but in any case not to be missed....His range is extraordinary, both in breadth and altitude. He is as self-confident on the politics of Lebanon as on the ontology of the Harry Potter books....I still find Hitchens one of the most stimulating thinkers and entertaining we have, even when-perhaps especially when-he provokes."—Bill Keller, New York Times Book Review

"The essays in 'Arguably' remind us of other dimensions to this singular writer and thinker that are sometimes overshadowed by the range of his political commentary. Though there are plenty of essays on politics to be found here, the book also treats us to other arrows in Hitchens' proverbial quiver, including his bracing, exhilarating approach to important literary figures...Its value is clear and needs no justification. And since his diagnosis of esophageal cancer last year, opportunities to hear him, understandably, have been fewer. Which is another thing 'Arguably' inadvertently addresses - for in reading this collection of his thoughts, immersing yourself in the particular turns of phrase and associations of Hitchens' wit, you suddenly realize something else: You're hearing his voice again."—Nick Owchar, Los Angeles Times

"One reads him [Hitchens] despite his reputation as someone who wants to drink, argue, and tear the ornaments off the tree, because he is, first and last, a writer, an always exciting, often exacting, furious polemicist. This fact, the most salient thing about him, often gets neglected in the public jousting. Arguably, Hitchens's new collection, forcefully proves this point. Consisting of three kinds of writing - literary journalism, political commentary, and cultural complaint - Arguably offers a panoramic if somewhat jaundiced view of the last decade or so of cultural and political history."—The Boston Globe

"Opinions are to Christopher Hitchens what oil is to Saudi Arabia. This collection, featuring his liveliest, funniest and most infamous essays....There is a time for the balanced, even-handed and sober approach - but why bother with any of that when you could be reading someone as provocative and impish as Hitchens?"—The New York Post

This feature require that you enable JavaScript in your browser.
END_OF_DOCUMENT_TOKEN_TO_BE_REPLACED

END_OF_DOCUMENT_TOKEN_TO_BE_REPLACED

This feature require that you enable JavaScript in your browser.
END_OF_DOCUMENT_TOKEN_TO_BE_REPLACED