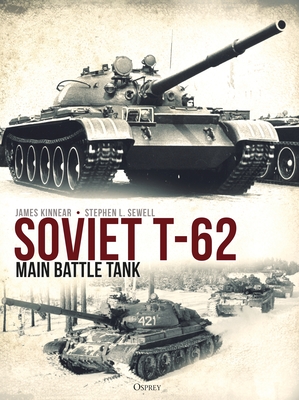 A highly illustrated study of the T-62 Main Battle Tank and its variants that formed the backbone of the Soviet Army during the years of the Cold War.

The T-62 is one of the most widespread tanks used by the Soviets during the Cold War. Developed from the T-55, the T-62 enjoyed a long career in the Red Army and even into the early days of the reformed Russian Army. It was the principal tank used by Soviet forces in the Soviet-Afghan War, and went on to see service with Russian forces in Chechnya and South Ossetia. It has also been employed in almost every conflict in the Middle East and Africa from its introduction into service. It remains in service with many countries throughout the world and has seen a great deal of use in the Syrian Civil War. Containing more than 400 stunning contemporary and modern photographs, and written by two experts on Soviet armour, this authoritative book will tell the complete story of the T-62.

Stephen L. “Cookie” Sewell was born in New York State and is a retired US Army Chief Warrant Officer and Department of the Army intelligence analyst. He was trained in the Vietnamese and Russian languages and has been an active Russian linguist since 1974. He has also been an enthusiastic scale modeler since the age of 5 and has built numerous models of armoured vehicles, specializing in Russian, Soviet and American tanks and armoured vehicles. He was the founder of the Armor Model and Preservation Society in 1992. While author of numerous intelligence articles, he has also written extensively on American and Soviet armour and provided a great deal of information to other authors on topics that include Korean and Vietnamese air war activities. He lives in Aberdeen, Maryland.


James Kinnear was born in Great Britain and has researched the topic of Soviet and Russian military hardware since his first visit to the Soviet Union as a young teenager. He subsequently lived and worked in the post-Soviet Russian Federation and the other states of the former Soviet Union throughout the entire period of post-Soviet “stability”, the two decades between the Soviet Union being considered a military threat and the Russian Federation finding itself again categorized as such in recent history. James has written hundreds of articles on Soviet and Russian technology. He is a formal contributor to IHS Jane's defense yearbooks and has published books on Soviet military technology with Barbarossa, Darlington, Osprey, and Tankograd. He now lives in the Algarve, Portugal.

This feature require that you enable JavaScript in your browser.
END_OF_DOCUMENT_TOKEN_TO_BE_REPLACED

END_OF_DOCUMENT_TOKEN_TO_BE_REPLACED

This feature require that you enable JavaScript in your browser.
END_OF_DOCUMENT_TOKEN_TO_BE_REPLACED