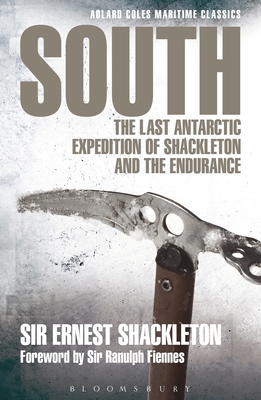 By Ernest Shackleton
$14.00
Email or call for price.

In 1911 Roald Amundsen beat Robert Falcon Scott to the South Pole, and Scott and his colleagues all died on the return journey. Ernest Shackleton, who had served with Scott on a previous expedition, decided that crossing Antarctica from sea to sea was the last great unattempted journey on the continent. His Imperial Trans-Antarctic Expedition of 1914–17 was a failure. But perhaps because it failed, with Shackleton not only surviving but bringing his crew back alive, the expedition became more famous than many of those adventurous voyages that succeeded.

After reaching the Weddell Sea off the coast of the Antarctic Peninsula, Shackleton's ship the Endurance became trapped in pack ice and spent 1915 drifting northwards. The Endurance was eventually crushed by the ice and sank, leaving 28 men stranded on the ice. They spent months sheltering from the subzero temperatures as the pack ice continued to drift. Eventually Shackleton accepted they could not rely on rescue and had to help themselves, so he led five men on an 800-mile voyage in an open boat to reach South Georgia, from where he was able to mount a rescue of all of the men he had left behind on the ice. Every one of them survived-a remarkable tribute to his leadership, courage and determination.

South is Shackleton's own account of the Imperial Trans-Antarctic Expedition. It is a true story of courageous endurance, survival against the odds and an undeterred sense of adventure. This special edition includes detailed maps so that the reader can see just how extraordinary Shackleton's achievement was.

Sir Ernest Shackleton was born in Ireland in February 1874. He led three expeditions to the Antarctic, most notably the Imperial Trans-Antarctic Expedition. He intended to return to Antarctica in January 1921, but died of a heart attack whilst his ship was moored in South Georgia. At his wife's request, his body was buried there.

This feature require that you enable JavaScript in your browser.
END_OF_DOCUMENT_TOKEN_TO_BE_REPLACED

END_OF_DOCUMENT_TOKEN_TO_BE_REPLACED

This feature require that you enable JavaScript in your browser.
END_OF_DOCUMENT_TOKEN_TO_BE_REPLACED