Seeds of Science: Why We Got It So Wrong On GMOs (Paperback) 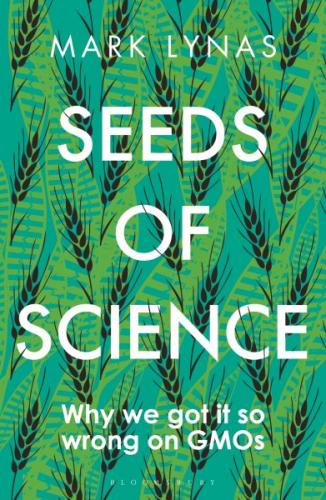 "An important contribution to an issue with enormous potential for benefiting humanity." Stephen Pinker

The inside story of the fight for and against genetic modification in food, from someone who's been on the front line of both sides of the argument.

Mark Lynas was one of the original GM field wreckers. Back in the 1990s--working undercover with his colleagues in the environmental movement--he would descend on trial sites of genetically modified crops at night and hack them to pieces. Two decades later, most people around the world--from New York to China--still think that "GMO" foods are bad for their health or likely to damage the environment. But Mark has changed his mind. This book explains why.

In 2013, in a world-famous recantation speech, Mark apologized for having destroyed GM crops. He spent the subsequent years touring Africa and Asia, and working with plant scientists who are using this technology to help smallholder farmers in developing countries cope better with pests, diseases and droughts.

This book lifts the lid on the anti-GMO craze and shows how science was left by the wayside as a wave of public hysteria swept the world. Mark takes us back to the origins of the technology and introduces the scientific pioneers who invented it. He explains what led him to question his earlier assumptions about GM food, and talks to both sides of this fractious debate to see what still motivates worldwide opposition today. In the process he asks--and answers--the killer question: how did we all get it so wrong on GMOs?

Mark Lynas is a journalist, campaigner and broadcast commentator on environmental issues. He is a contributor to the New Statesman, Ecologist, Granta and Geographical magazines, and the Guardian and Observer in the UK. He lives in Oxford, England.

“Seeds of Science tells the [GMO] story from a unique perspective. The logic of Lynas's conversion is an implicit challenge to both the American right and the left.” —The Washington Post

“Gives readers a firsthand look at both sides of the discourse [...] The book begins with heart-racing accounts of the law-breaking activities Lynas engaged in [...] By the end of chapter 7, science has won the debate.” —Science

“Mark Lynas has written a rattling good account of his conversion from student activist to respected science writer. This is serious stuff, enlivened by all elements of a popular thriller.” —John Deben, Literary Review

“The book is full of factoids that'll make you rethink a highly debated subject, and also what's really going on with those giant apples that don't bruise or brown.” —bonappetit.com

“Seeks to understand why greens, including Lynas himself, saw genetic engineering as an enemy from the very beginning [...] Lynas's experience suggests that the most important mind you can change is your own [...] Lynas has been through the fire to bring us this insight.” —Grist

“Partly a level-headed look at the benefits as well as the downsides of genetic modification, and partly a personal account of how Mark came to believe that the scientific method was, on the whole, not a bad way of analysing questions of crop production and farming. I found it riveting, largely because he writes so well and so open-mindedly, and I warmly recommend it.” —Philip Pullman

“Mark Lynas tells the remarkable story of a mass delusion fuelled by primitive folk-science intuitions, sacred values, and disinformation from some of our most sainted organizations. His exposé is an important contribution to an issue with enormous potential for benefiting humanity, and a gripping account of the tensions that can surround technological progress.” —Steven Pinker, Johnstone Professor of Psychology, Harvard University, and the author of The Better Angels of Our Nature and Enlightenment Now

“A gripping story of how a passionate troublemaker became an equally passionate campaigner for the facts. Seeds of Science is not only a compellingly-researched argument, it is the tale of how Mark Lynas's life changed. Reading it may change your life, too.” —Tim Harford, author of Fifty Things That Made the Modern Economy and presenter of More or Less

“Mark Lynas is a courageous writer whose evidence-based turnaround on GMOs should be a lesson to all environmentalists. A must-read for anyone who cares about our future.” —Simon Singh, popular science writer and author of The Simpsons and Their Mathematical Secrets

This feature require that you enable JavaScript in your browser.
END_OF_DOCUMENT_TOKEN_TO_BE_REPLACED

END_OF_DOCUMENT_TOKEN_TO_BE_REPLACED

This feature require that you enable JavaScript in your browser.
END_OF_DOCUMENT_TOKEN_TO_BE_REPLACED