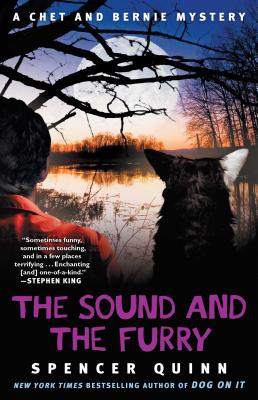 This is book number 6 in the The Chet and Bernie Mystery Series series.

In the sixth installment in the New York Times bestselling mystery series that the Los Angeles Times called “nothing short of masterful,” Chet and Bernie are handed a hard case in the Big Easy.

Chet and Bernie, the best canine/human P.I. team in the business, encounter a prison work crew that includes Frenchie Boutette, an old pal they sent up the river. Frenchie begs Bernie to go find his brother Ralph, a reclusive inventor who has disappeared—along with his houseboat—from the bayou. Not long after, Bernie fends off a deadly attack from a member of a shadowy gang called the Q’s. The attacker dies without revealing anything.

In bayou country, Chet and Bernie meet the no-good Boutette family and their ancient enemies, the maybe-even-worse Robideaus. At first it looks like Ralph’s disappearance is tied to a dispute between the two families over a load of stolen shrimp. But Chet turns up a buried clue that sends them in a new and dangerous direction involving the oil business. The more they find out about Ralph and what he knew, the less their chances of surviving to do anything about it. Now they’re up against Big Oil, shadowy black ops figures, and the Q’s—plus Iko, a legendary bayou gator with a big appetite…

A top-notch addition to the “deliciously addictive” (Publishers Weekly) series, The Sound and the Furry is an irresistibly suspenseful and humorous read that will keep you begging for more.

Spencer Quinn is the bestselling author of eight Chet and Bernie mystery series, as well as the #1 New York Times bestselling Bowser and Birdie series for middle-grade readers. He lives on Cape Cod with his wife Diana—and dogs Audrey and Pearl. Keep up with him by visiting SpenceQuinn.com.

This feature require that you enable JavaScript in your browser.
END_OF_DOCUMENT_TOKEN_TO_BE_REPLACED

END_OF_DOCUMENT_TOKEN_TO_BE_REPLACED

This feature require that you enable JavaScript in your browser.
END_OF_DOCUMENT_TOKEN_TO_BE_REPLACED