Dispatches from Pluto: Lost and Found in the Mississippi Delta (Paperback) 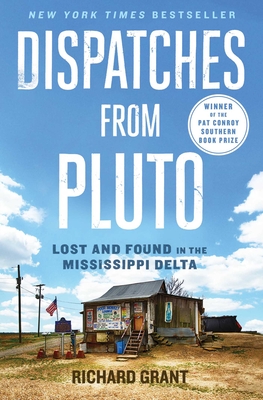 Richard Grant and his girlfriend were living in a shoebox apartment in New York City when they decided on a whim to buy an old plantation house in the Mississippi Delta. Dispatches from Pluto—winner of the Pat Conroy Southern Book Prize—is their journey of discovery into this strange and wonderful American place. Imagine A Year In Provence with alligators and assassins, or Midnight in the Garden of Good and Evil with hunting scenes and swamp-to-table dining.

On a remote, isolated strip of land, three miles beyond the tiny community of Pluto, Richard and his girlfriend, Mariah, embark on a new life. They learn to hunt, grow their own food, and fend off alligators, snakes, and varmints galore. They befriend an array of unforgettable local characters—blues legend T-Model Ford, cookbook maven Martha Foose, catfish farmers, eccentric millionaires, and the actor Morgan Freeman. Grant brings an adept, empathetic eye to the fascinating people he meets, capturing the rich, extraordinary culture of the Delta, while tracking its utterly bizarre and criminal extremes. Reporting from all angles as only an outsider can, Grant also delves deeply into the Delta’s lingering racial tensions. He finds that de facto segregation continues. Yet even as he observes major structural problems, he encounters many close, loving, and interdependent relationships between black and white families—and good reasons for hope.

Dispatches from Pluto is a book as unique as the Delta itself. It’s lively, entertaining, and funny, containing a travel writer’s flair for in-depth reporting alongside insightful reflections on poverty, community, and race. It’s also a love story, as the nomadic Grant learns to settle down. He falls not just for his girlfriend but for the beguiling place they now call home. Mississippi, Grant concludes, is the best-kept secret in America.

Richard Grant is an award-winning author, journalist, and television host. He currently writes for Smithsonian magazine, The New York Times, Al Jazeera America, the Telegraph (UK), and several other publications. He grew up in London, England, and now lives in Jackson, Mississippi. His latest book is Dispatches from Pluto, a New York Times bestseller and Winner of the Pat Conroy Southern Book Prize. His previous books are Crazy River, God’s Middle Finger, and American Nomads.

“The truest book about the Mississippi Delta since Rising Tide.”
—Tony Horwitz, author of Confederates in the Attic

“[Grant] succeeds, and with flair. His empathic manner, reportorial talent and eye for the unexpected detail make this a chigger-bitten trip that entertains as much as it informs.”
—The New York Times Book Review

"Grant takes a fillet knife and lays us open to the bone, like you might a catfish. He exposes our idiosyncratic insanity and brilliance, both the failure and the promise that are driven by an intimate yet remote love/hate relationship along the racial divide. It’s sad and beautiful at the same time."
—Mississippi State Senator John Horhn

“Readers with an appetite for a deep-fried version of A Year in Provence will find much to sate them here. … [Grant is] like a deeper and way funkier version of Peter Mayle. … it’s the individual voices and anecdotes he records that give Dispatches from Pluto its dissonant lilt and outré charm.”
—Jonathan Miles, Garden & Gun

“One of the best books to have been written about this part of Mississippi. Richard Grant has done something completely different from previous forays into this fascinating and frequently vilified part of America. … Grant’s book strikes a good balance between being partly A Year in Provence, Mississippi-style, and partly a searching investigation of the local culture. This is a man who has done his homework, asked hard questions, and made a point of getting to know everybody, white and black alike.”
—The New Criterion

“This book’s great virtue…is how it sets aside assumptions to look with clear, questioning eyes. Mississippi’s landscape, with its ‘crated little town(s)’ and ‘primordial interruptions in the empire of modern agriculture,’ is refreshed by Grant’s lovely prose.”
—Jackson Clarion-Ledger

“Part travelogue, part sociological study, part memoir, and part nonfiction heir to the works of William Faulkner and Tennessee Williams, Dispatches from Pluto is provocative in the best kind of way. Grant approaches his subjects with empathy, yet pulls no punches. The result is an honest, engaging account of life in one of America’s most beguiling, bewildering cultural outposts. This book is a revelation.”
—Alan Huffman, author of Mississippi in Africa

“[A] delightful inside look at life on today's Mississippi Delta.”
—Frans De Waal, one of his “6 favorite books” in The Week

“Grant writes with an admiration and tenderness for his new home and neighbors. The book’s often riotously funny, particularly when describing real-life crime stories in Greenwood and elsewhere. But Grant’s also thoughtful and earnest in trying to understand race relations in modern-day Mississippi… Grant’s insights as an outsider trying to decipher a new world make this book compelling and also challenging. He’s confronting tough truths and asking hard questions, but from a place of genuine respect and love.”
—Mississippi Business Journal

“Whether he’s writing about how to shoot a buck or how to heat a house, Grant is funny, funny, funny. He’s even funny at funerals, yet through all the escapades and hilarity, he never loses sight of the problem of Delta race relations. As much as anything else, this is a book about racism in America, and Grant confronts the issue with an outsider’s honesty and aplomb.”
—Amy Wilentz, author of Farewell, Fred Voodoo

"A lovely, appreciative and entertaining tour of the strange and rich Mississippi Delta."
—Shelf Awareness

“A fascinating blend of memoir and travelogue … a vivid and captivating portrait of the modern American South.”
—Largehearted Boy

“Think what Midnight In the Garden of Good and Evil could have been like if the author had a sympathetic understanding of the people. Richard Grant's Plutonic approach to the Delta turns up some marvelous surprises here.”
—Madison Smartt Bell, author of All Souls' Rising

“In the best tradition of Mark Twain's The Innocents Abroad, British travel writer Richard Grant explores the otherworldly Mississippi Delta by settling into an aging plantation home and letting himself be captured by an eccentric, racially-tortured and wondrously hospitable culture. Dispatches from Pluto is wise, wry, sympathetic and spot-on.”
—Curtis Wilkie, author of The Fall of the House of Zeus

“I’ve never read anything like this before, so ‘plain out’ revealing of humanity’s true nature—how we have tangled ourselves up into the goofball messy life we’ve made on earth (let alone Pluto) while still having a moment or two where we are incredibly kind and sensible.”
—Carolyn Chute, author of The Beans of Egypt, Maine and Treat Us Like Dogs and We Will Become Wolves

“Richard Grant gets it. Many authors that write about the Delta may come and stay a few months, then go back to their comfortable hometowns to burn or scathe the Delta’s mores, customs and culture. Richard bought an old plantation house here to become a part of the Delta and he writes about it in a way that brings laughter, astonishment, complexity and perplexity.”
—Hank Burdine, Delta Magazine

“Richard Grant is the ultimate cool customer, a fearless and skilled writer navigating the backwaters of rural Mississippi with his humanity on his sleeve, trying to get to the heart of what makes the Delta such a unique and soulful place while recounting a harrowing and funny, wise and heartwarming personal journey from nomad to proud homeowner. This is a great book.”
—Mark Haskell Smith, author of Naked at Lunch

This feature require that you enable JavaScript in your browser.
END_OF_DOCUMENT_TOKEN_TO_BE_REPLACED

END_OF_DOCUMENT_TOKEN_TO_BE_REPLACED

This feature require that you enable JavaScript in your browser.
END_OF_DOCUMENT_TOKEN_TO_BE_REPLACED